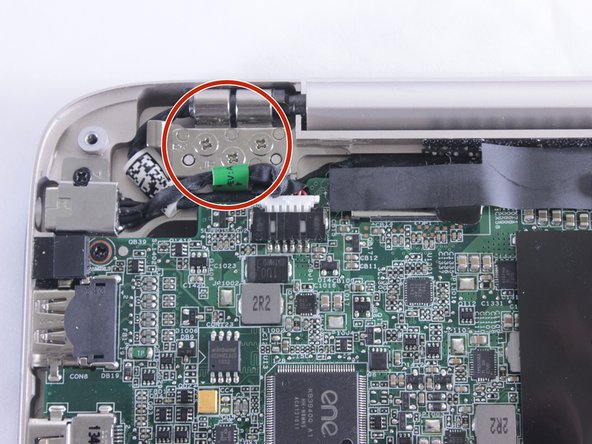 This guide will aid you in replacing your laptop screen. Make sure you are wearing the Anti-Static Wrist Strap and remove the battery before beginning this guide to avoid any damage to your computer.

This does not cover replacement of the LCD screen, only the hinge-up LCD assembly. I was hoping for a LCD/Digitizer replacement guide.

I think that it is not necessary to remove the battery in order to replace the screen. So steps 3 and 5 can be skipped. It is a good idea though, to pull the battery cable as described in step 4, so you cannot accidently turn the notebook on during maintenance.

Another notice: The 13-3010dx is structurally identical with the 13-3010eg (which is the German version with QWERTZ-keyboard). So this manual can be used for that one as well.

Another observation I made:

Once I had removed the screen (I removed it entirely, including case, hinge, and everything), the notebook didn’t start anymore. This was strange, because I had the battery connected, the case closed and the power supply plugged in. Basically, I tried to use the notebook with an external screen, but whenever I pressed the power button, this happened: Fan and keyboard illumination turned on, the illumination faded until only the F5-key kept illuminated and then the notebook turned off entirely, then rebooted. No output on the screen, no BIOS visible, nothing. First I thought, I had damaged the mainboard, but then I tried out some advice, I found on Youtube:

Something else to consider:

When I tried to replace a broken digitizer glass (the touch-screen, that sits in front of the IPS-panel), I found out that glass and screen are glued together all over and not only at the edges. For this reason, it is pointless to try to separate LCD-panel and glass. Even if you succeed somehow, it will be almost impossible, to glue together a new glass and the old screen without any bubbles of air in between!

So what you need is an assembly of digitizer and screen. On ebay I found a dealer named “ftdlcd”, who is originated in Hong Kong, China, but he somehow ships worldwide without shipping charges and without taxes. Shipping from China to Germany took about 2 weeks. A new assembly of digitizer and screen will take you about 170€ (October 2016). First time I received a wrong screen (one for the 4000-Series), but it was a high quality panel with QHD resolution and IPS technology. Now I’m waiting for the correct item, which the dealer promised to send immediately.

If someone is interested in how to change the panel – write a comment, then I’ll add some further steps to the manual.