I followed the guide to change the rear panel everything (but one) went very well. After assemble it now I get only white screen all the time, I´ve tried restore with iTunes, tried restore with DFU mode, it keeps making those sounds when you press the power buttom, I also can unlock it by "slide to unlock" but my screen is all white. Is my lcd gone? Should I order a new lcd display? Or it is a firmware problem? Thanks

I have the same problem. It is not the white screen of death, because there is no lockup. I tried restoring twice and don't know what to do. Thanks!

Thanks for your reply Joost, I agree with you that is not the white screen of death, so it is a hardware problem? Replacing the screen may solve the issue? Or the conector on the logic board is also defective? Thanks

I decided to try it too. Mine should arrive in 2 weeks. Hope that is THE answer!

I got my new screen and it is still white... I fear the logic board is fried. Does someone know how to test this? iPod is still connectable to itunes and the touchscreen works. Thanks!

Noooooooooo! My new screen have not arrived yet, but I am afraid that I get the same results as you. Hope it works! Hope!

My LCD went white but i tried a restore with itunes and it works fine now.

This is what I've learned:

-some people can get the screen back by restoring firmware or performing a hard reset. It's worked for me but in just a few cases. If it works for you, then consider yourself lucky. Done.

-what is usually the case (and frustratingly so since you'll try EVERYTHING like I did) is that the battery has to completely discharge. Yep, put it away for a few days and then come back to it later. Avoid powering the unit on until everything is properly seated.

If you have a white screen, it does NOT mean the screen is defective; there has been hardware changes and the unit has to be drained of all possible charge to have a fresh boot - much like any computer.

Its becomming more and more mysterious, so we can say that the problem is on the logic board? or maybe on the conector? I have lost my hope on fixing mine.

I was attempting to replace the LCD in my 2G iPod Touch, and now my iPod has the same issue. I'm positive it is a fried logic board, more specifically the GPU, or the part of the board that deals with displaying a picture. I had my new screen installed, but I couldn't get my iPod to turn on, so I took the whole thing apart (removing all the guts from the shell) and miraculously it worked! So I reassembled the thing, but the screen stopped working when the USB connector was put into place. Curious as to why this was happening, I plugged my iPod in (after pulling the logic board out again), and my display worked once more. I quick unplugged the USB cable and placed the logic board back where it belongs, and I was thanked with the smell of electrical burning. At that point, my iPod was toast, but just to be sure, I lined the back of the metal case with electrical tape and put the logic board back in, and voila! I have a $200 flashlight. The thing is now a picture-less iPod Touch.

Thanks for your reply, my new LCD has arrived, changed and nothing, the same issue, so I agree with you that the problem is on the logic board or like you said, the GPU. I will try to disassemble it again.

Identical problem over here. Nothing works in terms of software: Normal restore, DFU restore to older firmware, hardware reset. I've had my 2nd gen iPod touch for more than a year now. About a week ago it started turning on with a white screen, cycling the power a couple of times got it back into the normal mode. But it got worse and worse. Now, no matter how many times I cycle the sleep mode, interact with the menu button and play with the slider (which seems to be still active based from the sounds), I can't escape the white screen of death. itunes still interacts just fine. Like the man said: very fancy flashlight.

Also THE only webpage where some ppl have the same issue as mine. Tried to replace my cracked lcd on classic 6th gen and came up with the white screen, looks like somethingh bout the hardware buh what? Would be gratefull if smo helps us all...

Updating my last post, right now it does play songs and all just the display is not in place

now, it looks like apple does have some issues with mainboards of this type... i have the same problem, as well...

I realized that some of the metal pices located on the audio jack's connector was mising and ordered one on ebay , I realy whish that is the problem in my case, fingers crossed...

edit: right, it seems WSoD was the logic boards fault after all. At least thats what the authorized apple tech.sup said. Whatever, now its up and running, guess they did something on the motherboards flash...

When you are working on your ipod, remember, static electricity built up in your body can destroy the logic board, ie,specifically the integrated circuits. Make sure you are well grounded. Best bet is to purchase a wrist strap to ground yourself. You can get these on line. not very expensive and it can save youor logic board.

I had a white screen as well after replacing the battery, I was able to fix it by either just messing around with the logic board or i think the more likely by turning on the screen, while it was still on i unplugged the the lcd cable, i did this twice and after the second time it turned on correctly.

I've gotten it a couple times, fortunately the reset got rid of it

I had the same problems with my iphone 3gs after I replaced a new LCD and tried some everything (powersleepbutton/homebutton method ..) 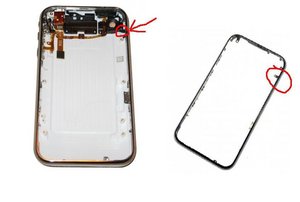 Can anyone confirm this has helped ? Ive been stuck with the same problem for quite some time and yes even though its old , i still feel it's worth fixing. Haven't attempted opening it up so would like to know if i should. My local iFix shop couldn't be bothered taking a look at it.

Help I was just using my iTouch I tried on a new case for it did not like the case, so i replaced the old case on it and every thing on my screen went grey.

How do I get back to the ori screen?

it took me only 20 mins to reslove the issue, lucky my phone only had 3% battery left. the way i resloved my issue was to take off the logic board. so as in phone fully shut off. and put every thing back together. and its back to normal. oh yah!

conclusion, make sure the battery is fully discharged before connect every thing.

Fixing the copper piece from the corner on the back of the motherboard worked flawlessly with my 3gs! I was sure it was the LCD that was faulty at first...

I took the motherboard together with the dock and LCD out of the case, connected them, and it booted perfectly when I connected the phone with iTunes, but the white screen come back as soon as I put the phone back together in its case. I found this post later, and tried to lift and reposition the little copper frame, so that it will touch the back on the motherboard (just beneath connector number 1).

Thank you very much for the help guys, and good luck for those who are encountering the same issues with the screen.