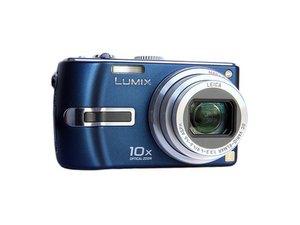 a compact 'Travel Zoom' camera announced on January 31, 2007 as the successor to the TZ2.

This is a 10x zoom - while turned off, inside it's case, was dropped on floor - not that big a bump, but something happened.

Lens now extends about halfway, stops, retracts completely, tries again 2 times,then gives up and retracts and stops, displaying the message on the LCD - Please turn off and try again. Obviously programmed for a balky lens extension during design and development!

Earlier in life, while turned off, the camera fell from a pants pocket to the sand at the beach - about 12 inch fall to soft sand - almost no impact at all, but might have gotten a grain of sand inside? Repair shop looked at it, then called and said it was working and they didn't do anything (and didn't charge me either). With this new issue, I've taken the camera apart down to the lens assembly and from there am stuck - it's a unit and I'm sure is very expensive - Leica 10x optics. From other camera posts I've heard there are gears that could be jumped a few teeth - if this is the case I would like to be able to get to that level of disassembly and fix it.

On the theory that there's a grain of sand inside, I have used compressed gas/duster to blow up into the lens as it's extending, in case there's something lodged somewhere. No luck. I've even tried dropping it 6 inches onto formica counter on various corners under the theory that something is shifted and can be shifted back - no luck, but it still extends partway, pauses, retracts, repeats twice, then retracts and quits.

Rick Cunningham, get the service manual on the device page Page 31 and on shows you how to disassemble the lens. Problem will be to find parts, if needed, for the internal workings. Hope this helps, good luck.

Wow!! A few hours after posting this impossible problem, this very nice Old Turkey provides a repair manual that goes all the way down to lens assembly disassembly instructions. If I finally make this work, I think I owe you a bottle of Old Turkey?

Thank you for accepting my answer. I gladly share that bottle :)