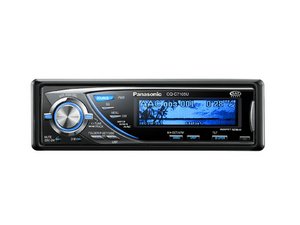 The car amplifier doesn't provide a signal to the sub

I have the most perplexing of issues at hand, and I don't know where else to turn to but here.

My sister's car -- namely, the car's sub amplifier -- is giving me all sorts of sass. I'm trying to diagnose it from a world away (she's in Tennessee, I'm in California) and it just does not want to work properly.

A bit of background: I sent her my old subwoofer and amplifier because her setup stopped working awhile back, and she was unable to take her old sub+amp up to Tennessee when she moved anyway. So, I shipped her my sub+amp in "known good" condition, and my amp just flat-out refused to work. It powered on briefly (the yellow LED on the amp itself turned on, but not the green LED on the subwoofer level controller), but turned off as soon as she hooked up to sub... And then it never powered back on again.

So after some brief multi-metering, we chalk it up to a bad amp and she orders this Boss amp from Amazon.

Yesterday the amp arrived, and we're back to square one. These are her installation pictures: pic #1 and pic #2. Please refer to them, as I will be using the specific names found on the amp. This is what I know, according to sister:

So that's where we're at. I basically have three questions:

The issue is that the sub is encased in a completely sealed enclosure, and she'd have to tear the whole thing apart in order to ensure the wiring is fine. So I'd love to be able to *not* have her do that if at all possible.

Where is your ground point

My bass from my boxes keep going out! But the amp doesn't go in protection mode!! What's wrong!! Radio still play! And amp comes on but the bass won't come back on. Why?????

Remote wire is to power antenna then. You need to run the remote to the remote wire hookup behind head unit or if you have factory hook it to 12v. Constant in the fuse box

Bass from amp works great on radio mode until I Bluetooth or usb music ,the Bass from amp don't come out,alpine deck

My sister was resourceful and instead of taking out the sub, she instead took off the side RCA jack panel so she could check the wiring.

Lo and behold, one of the wires that connect to the RCA jacks had come loose on the inside. She secured it properly and everything worked fine afterwards -- including the old amp!

I have a problem with my 2200.1 watt amp.. the led light won't go green it just stays read... I connected everything the right way but then yet it don't get any signal

She has the remote wire crossed with the power antenna wire in back of her stereo.

I have two sub speakers and for some reason they are brand new and the amp is plugged in just right and speakers are good and ground battery and I have the blue ignition to the back of the amp and we tried it doesn't work ??? Then we thought it was stereo took it out got my friends nope not problem then we thought the amp so we tried putting his in doesn't work then we tookmy amp and put it in back of my friends truck it works anyone plz help me I'm lost and do not know what's going on we replaced all the fusses and everything good

Im having the same exact problem my amp i just got off amazon is a boss audio 5000w and it is turning on fine as well with my deck but the only thing playing the music is the regular speakers so i went threw everything and the only thing ive come up with is that the RCA outputs are not reading 12v like they should and yes my car was running when i tested this and i would have to take this deck completely apart to see the connections behind and dont know if i would even be able to put it back together, so should i assume that is what is wrong ? The decks red and white RCA plugins are shot , and get i new deck and sell this one because it works for everything but getting the music back to the amp witch someone wanting just a deck wouldnt need ? Im probably going to pull it apart and look at the connection ill post back to see if i got the solution.

Sometimes the blue wire is for power antenna and only comes on when the tuner is selected. So double check if there is another blue wire coming out the back of the deck and if so use that wire instead.

When the accessory power is on or the car is running, the Remote to Ground connection should measure 12V.

If there's a negligible voltage coming from the source of the remote wire, that's probably the issue - especially if the problem persists with different amps including a brand new one.

Have your sister check the connection of the remote power cable.

of course check all grounding points. then try bypassing the remote power cable.

stupid question but does her radio support a sub amp or are you just running speaker signal to the sub assembly?

Have you tried remotely testing it? As in using a different power source? Just seems like a hiccup if you're not getting any power. Maybe even a sensitive amp. I know my kenwood deck would give me errors all the time when I tried to install it. Wether I'm wrong or right about how I fixed it, I THINK there wasn't enough continuity within the speaker wire. I cut the the wires shorter and had less wire available, worked after that.

I use to hook up amps and subs for testing with various speakers and such. I say start with the power source though.

check all of the grounds to the amp and to the radio. bad grounds could be the issue because the radio pulls more of a load with any amps or anything else connected to it. also disconnect the remote? does that work. try taking out your input lines one at a time see what happens. try taking one of the input connectors and switch left to right. any changes. write back with what happens

Hello My name is Heather.I'm sorry for what your sister is having trouble with her sub's powering on,but nada is coming from the subwoofer's.well I use to have six ten's in my little Saturn about two years ago and one day pulling out of a store my music just stopped playing out of my speaker's so as me and my best friend was troubleshooting what the !@#$ happend we noticed that all that music my radio couldn't handle and their for my rca's plugs on the radio was blew out the frame..so yes your second guess that you mentioned about it being bad rca jacks on the radio.I would have her go with that being her issue cause it was so mine and I had to replace my very $$costly tv/radio with another and !@#$ it if it did start to play music threw my sub's again.so good luck to her.I know how she is feeling cause I once was there too.

I think you have to change your amplifier.