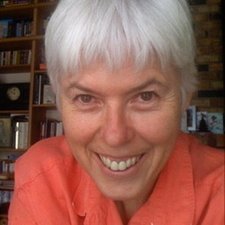 Won't start up with any battery installed

This BlackBook 2,1 had some cranberry juice spilled on it (of course the owner said "not very much", that's what they always say!) and the next day would not start up.

I took off the top case and could see no sign of liquid. Stuck another top case on and it booted OK after resetting SMC and PRAM (this was with AC power, no battery installed, before I replaced all the screws.) Put the original top case on and it booted too, so I buttoned it up. Noticed the magsafe light was green even though battery showed no charge when battery button was pressed. After reassembly, computer showed no sign of life when power button pressed. Removed battery--starts up fine on AC. Noticed slight flickering on magsafe light with battery in (not the stead blinking you get sometimes with other problems.)

Installed a new battery from another MacBook--white, but battery is same model, A1185, and identical power specs. Now the magsafe light blinks green (as opposed to flickering! No booting. Reset SMC; now the magsafe light does not come on at all. Remove the white battery, and we boot up fine.

Later note: Noticed a faint clicking when power button held down (with battery in.) Must have held power button long enough to do a firmware or programmer's reset, because it booted! But with fans going full blast. Shut down and started again, and it worked, again with full fans. Another SMC reset made it revert to previous behavior of not starting, though this time with no clicking when power button is held down. Removing battery enables it to boot on AC power.

The owner says it was working on battery before. Could the juice have damaged the power system somehow? Anyone know what it takes to fix this? Or is it now a desktop computer? Could a replacement top case help in a power situation like this?

This does not sound like a DC-IN problem to me.

I would also download Coconut battery to see what's happening with them: http://www.coconut-flavour.com/coconutba...

This may not work correctly if the battery connector is bad.

+ This is the first part I would change also. Ralph

Actually good point, this reminds me of an earlier question.

As Mayer stated, it could definitly be the battery connector that is bad, but in my experience it could also be the logic board that is fried... because I have worked on 15-20 MacBooks with this issue and and about 50% were the fried power ciruitry on the logic board. and when a new battery connector was installed and a battery hooked up it fried the new connector... So unfortunately that may be what is wrong...? Hope that is not the case but it may be "a desktop computer" now, If this turns out to be the case a new logic board is required (can be gotten here on ifixit), or a good component based repair tech. (which I am not, alas...)

yes, it could be the logic board, but that's the last thing I go for as it becomes a decision at that point of scraping it out due to costs. I figure if I have to pay 50% of the cost of buying the machine, maybe I should buy something else and part out what's left.

I agree with you there Mayer, but I figued since you had covered all the bases there that I would ad the worst case scenario as well...

The client is deciding what to do. We might send it to iResQ for a diagnosis, which won't cost much, and if we do, I'll post back and let you know what they say. That's better than having me flail around replacing parts that might get blown.

I was wondering if the bad part could possibly be in the top case? Would it be worth sticking on a different top case to see if that helps? If there's *any* possibility of that working, then I wouldn't mind spending the time to do that (the only bad part is those three fiddly screws underneath the RAM cover.) I do have a couple of used top cases here.

Colleen, if you want to know if the top case is the culprit (I don't think it is) you could remove the top case and boot the machine by tripping the two power pads located just over the optical drive connector by the fan. Look for the power icon to locate them (same icon than on the power button). If booting the machine this way you get the same problem then the top case is probably not causing the issue.