Hi, i have very annoying problem with my 27" late 2009 iMac (MB953LL/A), that have been mentioned here few times already, but nothing seems to help. Basically the problem is that my screen backlight goes black from time to time (i still see content behind black screen with flashlight), it can be fine for a day and next day it can turn off 50 times per hour. After i put display to a sleep and wake it, it starts working fine again.

I've read here that someone solved the problem by changing V-Sync cable, i ordered one, changed, but that didn't helped

The next thought was about overheating, so we cleaned everything from dust and removed heat sensor from screen and just sticked it on SSD, we also removed V-Sync cable completely. But the problem is still there.

I had this problem on a completely cold computer that was waken up after night.

Any further ideas or recommendations? Thanks.

Just heads up regarding problem.

After i detached led temp sensor from screen, it’s been more than 2 weeks without single blackout. So i don’t think that the problem is in LED driver board. I have new problem just right after removing vsync cable and led temp sensor: The screens blinks (dims) once in a 5 minutes randomly, to be more clear i made a gif: http://i.imgur.com/zUXXFvK.gif. This problem is somehow related to V-Sync cable or this might be more serious problem?

You have managed to bypass the protection logic! How about really fixing your system instead. Put back the thermal sensor and reconnect the V sync cable. All you have done is about the same thing as a biker riding down the road with one wheel missing... Sure you can do it but is it wise? Apple does a good job designing their systems and 99.999% of the systems don't require disconnecting things to work. In the long haul you're just wearing out your system sooner.

I did my research, i’ve found more than 6 threads when people with the same problem changed their led driver boards and it didn’t helped. I don’t see any problem of buying new board, i just think that problem isn’t here: failed led board turns off your backlight completely and forever, i don’t mind to fix this problem ‘normal way’, i just don’t understand how you’re so sure if there is clear evidence, that changing led driver board doesn’t solve this the problem. For example, a guy from my thread on apple forums: "I've got the same computer, and have had the same issues for over a year. Year before last Apple switched out my HD, installed a new logic board, new graphics card, and I have the issue. I have since switched out my LED driver board, as well as my v sync cable”. This guy changed his led driver board twice and you’re still offering me to throw $120USD into trashcan.

OK, lets say its not the LED driver board then what else could it be? The only other possibility here is the display unit its self. Now what are you going to do? If you want a better answer here you'll need to send it or drop it off at an Apple Authorized service center or Apple Store and let them diagnose it and fix it. Apple is likely to EoF this system this year so you may want to move forward in getting it fixed soon as you will loose the lower cost repair option (Apple Store).

Thats what i’m trying to figure out. What about cables? Might be failing LED screen itself, yes. The apple service will offer me the same stuff as for a guy from forums: Change your driver board, change your gpu (they even changed HDD (why?) etc. There is no problem with this, i just want to wear this computer till it dies and just buy a new one, instead of paying tons of money for new gpu’s, boards and led screen etc., especially when someone already did that and didn’t solved his problem. I had gpu failure in 2013 and i paid like 500USD, so you can imagine how much it will cost me to ‘find’ the problem in apple service. So in the end, i’m ready to buy new iMac, but as this still works, i don’t mind using it, thats why i’m using all kinds of diy solutions, which kinda works, but now i need to fix ‘blinking’ screen somehow.

While it's important to gain other opinions. One does need to filter a bit as sometimes the information is not correct or is someone's wishful thinking. When gaining help from people sight unseen you do need to validate there skills by reviewing other dialogs. Likewise, there is a limit here on what I can help you as I'm dependent on your eyes and what you document. So any errors can mislead. Which is why I think the best answer for you is to forgo fixing your own system here and let an expert fix it I.E. Apple Store.

Have you tried replacing the LED driver board which is the power source for the LCD's backlight?

Further investigating has pointed to a high current load of the LED strip within the display which burns out the LED driver board. This also can create a momentary flicker effect going off every 30 or so seconds.

Sadly, both the display and the LED driver will need to be replaced to properly fix this.

No, but how i can be sure that the problem is in backlight board? Is there any tests for that? I mean, it's ok to buy V-Sync cable for 20GBP just for tests, but backlight board will cost me more than 100GBP.

I would like to add, that LED screen is pretty hot almost all the time, when i was testing it after changing V-Sync cable, temp was was 75°C and more. I didn't find any information about normal screen temperature.

If it's a temp issue you'll need something to see the sensors. Download this app: temperature gauge pro so you can see them. Paste a screenshot for us to see.

You stated it also failed when the computer was cold and you could see the desktop with a flashlight. If that is true then I would suspect the LED driver board is bad.

Screen was pretty hot, but it was always like that, so we just removed temp sensor from the screen and it helped at some point, i'm getting way less blackouts. Yes, screen is working fine and i can see the desktop using flashlight, the problem is in backlight 100%. Yes, i had some blackouts on completely cold computer, i even did tests in cold room with fans running 100% speed, the smcFanControll showed temp below 30°C and this not helped, but somehow running fans faster helps at some level, but i can't be sure, because everything is 100% random. Is there any way to test LED driver board?

I had this issue where backlight would go off randomly, sometimes would work ok for an hour or so then go off (shining torch on the panel showed desktop).

The board is mostly solid state but there are 4 caps on it and it runs pretty hot, so I removed and tested the caps half way down the board and these measured ok, but the two near the power connector at the top seemed iffy. So I changed them - 270uF @35v (didnt have correct values so used some a little bigger) and its been ok since.

I know theres some variations on this board so might be different fault on others, but mine was V267-604HF

Hope this helps someone else. Its about £40 for new board and caps are a few pence so this is a cheap fix if you have the skills.

This didn't last - although did last a fair while. In the end it was the backlight strips in the LCD itself!

I was fortunate enough to find them on AliExpress for very little money. A right fiddle to change though not for the faint hearted! The LEDs on the strips I removed had cracks in them when viewed with a magnifying glass even though they all worked.

And measuring current draw on individual LEDs, many drew more current than others.

So the backlight board is switching off due to excessive current draw. 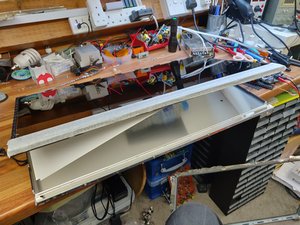 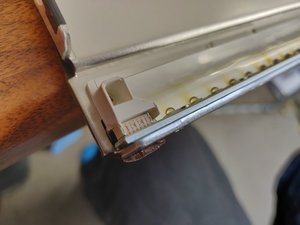 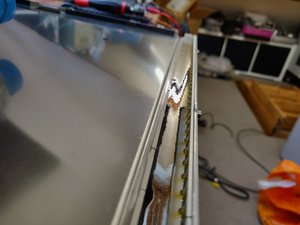 Did your problems happen to start after changing a HDD?

No. Actually the iMac was obtained faulty. But I know the previous owner and nothing had been changed.

@ferrograph - read your solution after having tried many things myself - unsuccessfully replaced the HDD, graphics card and a couple of cables. Am now thinking of both replacing the backlight board and the backlight strips in one go - can't stomach the idea of replacing just one of them and it still not working. You mentioned buying the strips on AliExpress, am I right in thinking these were original (used and working) strips? And would you recommend changing both the board and strips? Thanks.

@inspira I assume the strips were used but I did examine each LEDs on the new strips and none were cracked and so perhaps they were new. Here is the link (obfuscated to avoid being removed): aliex press item 1000006517799 dott html

Just use another monitor till you buy a new computer, I have my macs all hooked up to large screen tv 45 inch or better. I can sit back and work, with a wireless keyboard and mouse I can sit in a good chair and use a coffee table.

27" Imac Mid 2010 running El Capitan. Started having the same issue when I updated to Sierra last year. Reverting back to El Capitan solved the issue until this morning, where it started flickering before going completely black. The addition of "SMC Fan Control", and operating the fan speed at higher RPM's brought the screen back. Brightness must be 100%, otherwise it still flickers. It definitely seems like a heat dissipation issue, all things considered.