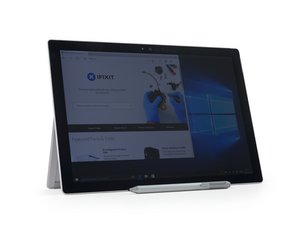 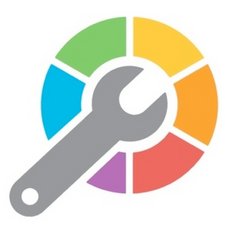 Why does my touchscreen only work when touching the case?

I recently picked up a Surface Pro 4, and I love almost everything about it. There is one behavior, however, that puzzles me. It seems that, when I am holding the device with my hands, the touchscreen is perfectly responsive. When I touch something, even lightly, it recognizes my finger... no issues here.

The issue arises when I am not touching the back of the tablet. Let's say I have it propped up on its kickstand, or resting on a table. If I don't touch it for 30 or so seconds, then try to use the touchscreen, it can become very unresponsive. Basically, if I have no point of contact with the device other than with the finger I am using to touch it, it have to firmly press, or hold, to get the screen to see my finger.

This behavior can be demonstrated in OneNote with the finger-writing enabled. I put one finger on the side of the surface, or the back, or anywhere that is magnesium, and I can draw hundreds of lines and it will pick up all of them, with their correct lengths. If I don't touch the side, about 50% of the lines will show up (doesn't recognize the other 50%?) and the will often begin a few cm away from where I started, but end in the right place. It's almost as if once it recognizes my finger, I can keep a continuous line going, but it has trouble recognizing it.

The digitizer works flawlessly at all times.

Anyways, just wondering if anyone has experienced anything similar with maybe a surface, or just a tablet in general. It's such a new device that not many issues have come up when I try to look into it elsewhere. I have worked on so many iPads, and I've never seen anything similar to this.

I have the same problem, on SAMSUNG GALAXY S10+ !!! with glass screen protector applied.

It seems to be, that the too thick glass screen protector causing the problem.

How do I know it?

The screen protector has a small circle cutout, for ultrasonic fingerprint sensor to work.

So, if the phone lays on bed, or anything else than me (not in contact with my human body), after a few seconds it stops to work. But on the cutout, where is no glass, or near top or bottom edges of screen (with glass protector) it can sense my finger.

Have you checked that the touchscreen is at the factory settings and has not been re-calibrated. Here is a link to show you how to check, go to solution 3.

Also this link may be of interest regarding touch

I have not calibrated the screen for anything. The option to reset to factory settings is greyed out. It's only a few weeks old, so I have changed a minimal amount of settings up to this point.

Since the touchscreen is of the 'capacitive' type with, to quote the 2nd link above 'a different (more resistant to interference) technology to detect the pen, the induction induced electric energy – while harmless to you – can interfere with the Surface’s ability to detect a touch.' that it may be a compatibility issue between you and the Surface. You might wish to go and try another Surface 'in store' to see whether it is just your particular unit that you have the problem with or whether it is between you and all Surface tablets in general. It may be that you have (as far as the tablet is concerned), a very low electrical charge. Holding the back of the case may increase the charge (static electricity by friction- movement across plastic) sufficiently to be detected more easily. Just my thoughts.

Here is a link - scroll down to the section titled "Capacitive"

This is happening to me as well. I wonder if the zagg screen protector has anything to do with it. Let me know if you found a solution.

I have a screen protector on too. It's a glass one from I believe Sparin. I've never used the surface without it though, so maybe that has something to do with it. It is pretty thin though. And there is no dust or debris between the screen protector and glass.

The screen protector I have is glass as well. The interesting thing with my surface is that my wife can use it just fine. It has no trouble detecting her finger swipes weather or not she is touching the back of the surface with her other hand. I must be less electric than my wife.

Hello, I live in the UK and surprisingly I have the same issue with my surface book! This is present when I have it detached from the base and put on a table for example and the touch will be almost useless until I put only a tiny bit of contact with the metal, it works flawlessly. I have pretty much the exact same problem as you two have, and no one in my family can bypass this problem. This can be caused by my glass screen protector though as you two both have a glass screen protector installed.

I have the first surface pro. Bought it refurbished. It worked great for years and then developed the same problem. If I touch the case with just one finger the screen becomes responsive as long as I keep my finger on the case.