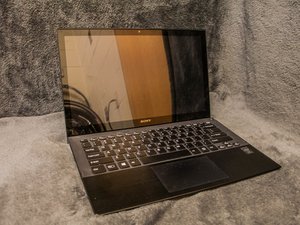 I can't adjust the sceen brightness

No matter what I do it isn't possible to adjust the screen brightness on my computer.

You need to find the VAIO Control Center and go to Image Quality controls. Then look for an on/off button for the feature and turn it off.

The Intel HD Graphics Control panel can be found by searching the control panel, this is done by pressing Windows + S.

Once the control panel comes up, you'll need find the Power management panel. Then click on the battery controls.

Seems like we have a "Trend". I just received a Sony VAIO Pro SVP series, for repair. Primary complaint, cannot "Make Screen Brighter". This is not the first Sony (or other laptop for that matter) with display brightness issue.

Here's what's happening so far with this machine:

-Virus scanning (with external drive cradle) | Nothing even close to significant, and nothing that would indicate a Trojan or MBR attaching to machine level brightness control (My recommendation: as a "Cover-All" basic proceedure).

-During the use of (USB boot) diagnostic tools, for hardware check-up: Oddly enough, nothing???

-While stepping through the GAMMA test (Adobe Suite tool), I inadvertently grabbed onto the screen, by the bezel ring. An odd thing happened, intermittent, changes in the Primary color spectrum. (this step was because the client is a photographer, and uses Adobe Suite gamma correction software to get the best view of his photos). I would normally, never even considered checking the display issue from that angle.

-Attached to external monitor. No brightness issues at all. Not even an indication.

*At this point we're pretty sure it's a Hardware/Wiring issue, of display related failure.

Lots of possible issues, so we switch to HW Diag. Mode.

What test remain: Test Wiring (harness), Inverter, Re-seat connections to ensure that this is not simply oxidation. Most of these steps are going to require (at least partially) opening the case. You'll want to be aware of the time you are now going to spend, as part of the "Repair" Process.

*Here's why: You don't want to spend excessing amount of time, in a Diag MODE. So put on your billing hat, and think.

Now is a good time to speak with the client. "killing two birds with one stone". Since this is MOST likely a hardware issue, as a result of our initial diagnosis. We know that this is not just a software tweak. Sony's are pretty well known for being a big pain to disassemble, and you don't want to do this twice. If you want to maintain margin. Asking permission to open the case, is a good idea, a small "Bench-Fee" is not unreasonable either.

Anyway, I hope this helps.