I've installed a new DC-in board and the magsafe/charging issues seems to have been resolved. However I'm just getting 3-4 hours of battery life as opposed to at least 5-6 hours before. I don't know if this is due to the aftermarket battery although the new battery has higher specs than the original (7200 mAh).

The laptop's been humming along all day. Battery fully charged at 100% according to coconutBattery and the MBP itself. I leave the laptop for 30 mins and when I come back the laptop is dead and doesn't power up. Magsafe led is green. When I press the button for the battery status indicator nothing happens.

I remove the magsafe, make a SMC reset, put the charger back. Battery at 0% and charging with amber led. Battery status indicator working again. Laptop powers up normally. Battery at 1% charging with 50 watts according to coconutBattery.

A minute later charging drops to 0.2 watts then goes back up again. While typing this, the battery is at 10% and charging with 40 watts and seems to be running normally.

It's like the laptop believes it's fully charged and running off wall power while actually it has been running off the battery all day until the battery ran out and the machine dropped dead.

This laptop has several symptoms:

- Battery level indicator is sometimes very dim or not working at all, especially while charging.

- Static noise from upper left corner, near the magsafe port. Fiddling with the magsafe connector makes it stop.

- Sometimes charging is very slow. Flipping the magsafe connector around sometimes fixes it.

- Battery Needs Service indicator showed for a few days then went back to Normal but battery capacity is decreasing rapidly.

- Loss of power. Some times, while magsafe connected, battery suddenly drops to a much lower level. Fiddling with the magsafe connector usually puts it in charge mode. Sometimes the computer just flat out dies.

Have tried the following:

- Did clean magsafe port and connector with alcohol and a contact cleaner.

- Replaced the battery as capacity was decreasing fast.

Thankful for any hints. 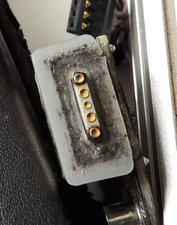 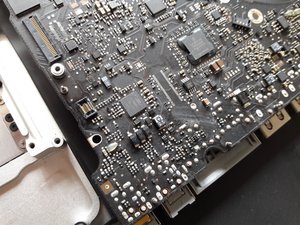 To get a better picture of what's going going on, download and run Coconut Battery and let us know your results. http://www.coconut-flavour.com/coconutba...

Also try resetting the power by disconnecting the battery and mag-safe adapter, press and hold the power button for 5 seconds then hook it back up.

You do seem to fool around with that mag-safe board a lot. It might be worth it to change it out. Also the problem could be with the adapter. See if the pins are fully extending using a wooden toothpick to depress and release them. Also use a multi-meter to test the out put. The pin out is pictured on the right side of this wiki: https://en.wikipedia.org/wiki/MagSafe

Thanks for the input. Please see the updated information above as well.

Looks like it is currently charging very well. Let it charge for a couple of hours and check again.

That's what's bugging me. Between "hickups" it works normally, sometimes for days without a problem.

Sorry @mayer . I keep forgetting to ask for more information. I should get in a habit of doing that.

But that is the most fried magsafe port I have ever seen.

Sorry m8, but it sounds like either a fried magsafe board and/or power adapter.

The static sound would further prove my point. Is it possible for u take a picture of the magsafe board

MacBook Pro (15 Zoll, Anfang 2011, Unibody) MagSafe DC-in Board (Gleichspannungsversorgungs-Platine) austauschen This is where the board is located,

Thanks for the input. If it's only the DC-In board, then I'm a happy puppy. However, some concerns that this might be a logic board problem in addition to the DC board:

- Occasionally dim battery status indicator (the many dots with a push button). If I close the laptop lid it goes bright again, but only while the lid is closed. If I open it up then it's back to being dim. But it's not always dim. Can't find any correlation. Tried cleaning the connector to the logic board to no avail.

How can I check if the power adapter is OK?

Sorry. I was at work. Well, if it is bad, you should be able to see right on the prongs if it is fried or burnt. But yes it could be the board, but I would rather rule out other possibilities before coming to that costly conclusion.