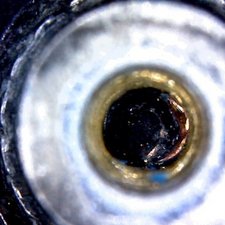 First, let me apologize for the lack of pictures. I don't have the device in my shop anymore.

I had this issue on a customers phone last week and determined it to be a faulty replacement screen, or so I thought. Issue had developed about 1 week after I had replaced the screen on the customers iPhone 7. They stated it would randomly become bright white then black and be unresponsive. Simply pressing the sleep/wake button would return the display to its vivid normality, only to randomly do it again without other symptoms. The customer returned so I could address the issue. The screen had a small crack under the tempered glass protector, but I did not believe it to have anything to do with the issue. (My supplier offers outstanding lifetime warranty and this issue would be covered even with the crack) I proceeded to replace the screen again. Testing before installing showed no issues, so i finished the repair and contacted the customer on her alternate number. While on the phone she asked for a number from her contacts. I proceeded to open the phone app and..... screen developed a criss-crossed (think fine vertical and horizontal lines resembling mesh) pattern followed by images dying away and the screen going white(imagine you could command screen brightness beyond factory limits to the point of overexposing everything), followed by the screen going completely black. Pressing the sleep/ wake button immediately restored screen function. I contacted my supplier and after eliminating any possible causes, we concurred it had to be faulty screens(bad batch possibly?). They cross shipped me new screens and the customer decided to continue to use the phone while we waited. To be absolutely sure I didn't end up with the same issue, I ordered several premium screens from another supplier as well. After installing screens from both suppliers, the issue remains. I did notice, however, that the issue occured only when I opened an app. And it is random. Sometimes the same app, sometimes another, but only when the app first opens and the screen image changes. The phone has been factory reset both from the phone and through iTunes, but the issue remains. The customer has been awesome through the whole ordeal, and even when there was no resolution, she was thankful I'd tried. She plans to try a warranty through Verizon, but I'm not optimistic. Our Verizon store has a bad reputation when it comes to customer service.

I've scoured the net for info on this, but to no avail. Hoping someone here has had experience with the issue or heard of it. In the end, I'm not happy at all with how this ended. I'll replace the phone if she's unable to get help from verizon, and we all know Apple won't lift a finger since it was repaired 3rd party. Like many other repairers out there, my main frustration is that I don't know what caused it. Thanks in advance!

Did you look for any broken component on the motherboard.

The connectors all look fine (under the microscope I mean)?

Yes. No physical damage anywhere. I even checked for long screw damage even though I've never made that mistake before. It seemed to be more related to software than hardware, just couldn't pinpoint the cause. It may be resolved after the next update too, just wont know until she lets me know.

Also, if it was physical damage, I'd think it would be a consistent symptom. Instead of randomly. I know there are hardware failures that can be intermittent (touch IC/Touch disease), but this doesn't seem like a hardware issue anymore.

Doesn't sound like lsd. You'll want to test against an oem part. A known good original Apple display. If the problem continues, I would have to say a cold solder joint on likely the gpu. Reflowing would only temporarily solve the issue, you'd have to safely remove the chip, clean the area, reball the chip (can't use a different one as far as I know) then reapply