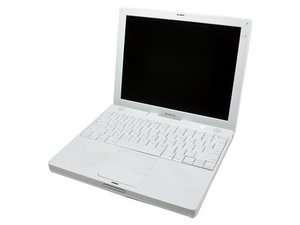 Released in October 2003, the iBook G4 replaced the iBook G3 as Apple's portable consumer computer. The iBook G4 was sold in 12" and 14" models and updated for the last time in 2005.

I want to fix my own logic board

I'm getting a question mark folder and the repair shop said I need the costly new logic board repair job. It would cost more than another laptop. I hate to just toss it. Has a new hard drive! Can I fix it myself and, if so, where can I find a good diagram of which part is the logic board when I open the case up? Also, I need specific layperson descriptions of the points I need to repair. I can do anything with instruction -- help!

If you have the system restore DVD, it's well worth trying to reinstall the operating system by putting the DVD in the drive, and then powering up holding down the "C" key to boot from it, and then following the prompts to reinstall the OS.

I wouldn't recommend trying to repair an iBook motherboard. They are generally not repairable once they start to go bad, and it is not practical or easy to do. Even Apple doesn't repair logic boards -- they just replace them.

I agree. Logic boards are frequently multi-layered boards, so there may be a problem that you can't even see, let alone fix.

It is unclear what you mean by "Can I fix it?".

"Is the actual problem with this iBook G4 something that can be fixed by replacing hardware?"

Most of the time, people who see this particular symptom -- a blinking question mark folder -- have perfectly functional hardware.

If you are lucky, you are one of those people.

If so, you can fix the real problem, that gives this particular symptom, without any hardware modifications.

Have you tried the ways of fixing this particular symptom described at:

If the real problem is one of the above software issues, then replacing perfectly good hardware isn't going to help.

If none of these fixes work for you, then it is almost certain that yes, it is a hardware problem that can be fixed by replacing hardware.

"Is the actual problem with this iBook G4 something that can be fixed by replacing the logic board?"

There are several pieces of hardware that, should they fail, would cause this symptom:

If the real problem is in some hardware other than the logic board, then replacing a perfectly good logic board isn't going to help.

"Can I fix iBook logic board by replacing or adjusting parts on that logic board?"

Not in any cost effective method.

There exist people with the manual dexterity and electronics test bench equipment and soldering rework station equipment to do that.

But there are far more valuable things they could be working on.

It's far more cost effective to discard the bad logic board and replace it with a good one.

"Can I fix an iBook G4 by replacing the logic board?"

Yes, if the problem is in fact the logic board, there are some excellent diagrams at

describing how to get at the logic board, and

says he was able to fix an iBook G4 by replacing the logic board.