I just installed iOS 11.3 and this new "Battery Health" feature only seems to work with a original battery from Apple?!

It makes all the battery problems clear for me!

I just installed an iFixit battery in my daughter's iPhone 7 with iOS 12.1.2 and the Battery Health feature works. Maybe apple corrected this or the battery is compatible with this feature now. 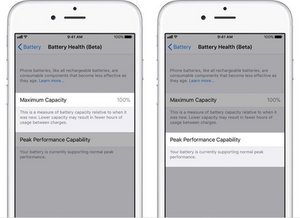 I received this straight from iFixit support:

Thank you for contacting us about your battery health!

We are aware that Apple's iOS 11.3 update includes a beta release of the Battery Health feature. Some customers have already reported the same scenario with their device -- the battery is unable to determine it's current health state -- which has lead to them believing that their battery is defective. This is not indicative of a defective battery, simply iOS 11.3's lack of ability to read the diagnostic data from the battery at this time.

It is our current understanding that this feature may not operate with iFixit batteries as our batteries are not manufactured by Apple. That being said, iOS 11.3 is so new that it is possible there will be a patch coming soon that may enable your iFixit battery to work with this feature. We encountered a similar issue in the last Apple update, 11.2, where we saw a rise in users report sudden touch response issues after updating their phones to iOS 11.2 (which even affected users who had never replaced components on their device). Apple later rolled out an update that corrected this issue.

If the battery you have installed is not prematurely shutting down or otherwise behaving strangely, you can try rolling back your iOS to 11.2 and wait until Apple releases a patch to fix this issue.

I just hope they do, with iOS 11.3, the device will have performance management. I don’t have problems with the iFixit batteries but If its not working you can’t disable the slowdowns in the Battery Health screen under Peak Performance Capability since is not displaying anything.

Basically all phones with aftermarket batteries will start slowing down when battery starts loosing capacity while original battery users will have peak performance until is time to replace the battery.

Thanks for the detailed reply

Great info. I have the exact same concerns. My iPhone SE seems to be running a bit slow even though my coconutBattery says that I am at 86% of max capacity. I love iFixit, but this is one time where I wish I had waited to get it replaced at Apple. I just didn't know the price would come down to $29 a couple months later. Apple tells me they will not replace the battery in any phone that already has a third party battery.

I had the same decision to make. Though, mine came a little later, and the replacement battery deal was already active. Sounds great, right? Hardly...

Apples not only doesn’t have a store nearby... they don’t even have one in this STATE. The closest one is in some place I can’t even pronounce in Loisianna. So, assuming you can take a few days off work and buy the gas, hotel room etc. to go there and have your battery replaced.... you have to wait through the 9 month waiting list..... Seriously?

“Buy an iPhone 7+! Best camera available, but so many software issues, you MIGHT get to use the camera 3 months out of the first year you own it.... when they’re not having you cross the continent to fix it! COME ON DOOOWN! 3 months usable iPhone for only.....$1,730!

So what happens if your seeing the message that it cannot read your battery when my phone is only 8 months old and has never been replaced at all. Bought brand new I opened the packaging and have never had a repair or had my battery changed.

Hi, so my battery has been showing a constant decline over that last few months it’s now at 78%. I’m not sure how all this works but I’m on IOS 15 on and iPhone 7plus does the battery health percentage still show for replacement batteries??

So you know i just purchased a iPhone 8 brand new from apple updated the device to new iOS and my iPhone is already at 94% battery life. apple put this feature in because of there lawsuit a tried and true way to see if you have a bad battery is to check a few things.

1. is the battery swollen, lithium ion batteries do have life spans and will go bad just like your AA batteries swelling is a sign the battery is starting to go.

2. does the phone slow down and get laggy around 20% battery life, thats the phone attempting to slow down to keep the phone battery lasting longer its a sign battery could be replaced

3. the most annoying one do you charge your phone to 100% unplug it and it drop to something like 80% in a short time, thats a large sign that battery needs to be replaced

My 8 Plus after 4 months it only has 97 percent capacity. But I use other apps in the App Store it shows that I have 100 percent battery capacity. I did not believe in Apple in this Battery Health issue.

But you can still get information on your battery. Aida64, free in the App Store, will show lots of detailed system information, including battery charge and wear level. My old battery showed about a 50% wear level (meaning it only held 50% of max charge) but the new one now shows a 0.51% wear level (meaning it holds 99.5% of max charge). I'm sure there are other apps out there that will show similar information, but Aida64 is basically my go-to on both iOS and Android.

This issue is not specific to ifixit batteries. In fact, I recently got my iPhone 6 battery replaced by Apple directly, and now I cannot view the battery health percentage, so it seems Apple has disabled the feature altogether if it's not a stock battery (or it's a bug). Really hope they fix/change it.

I have similar problem with this new feature after replacing battery.

Mine is NOT SHOWING 100% capacity of new battery but 65% capacity and service status of previous very old battery...

I have the same problem (unable to determine battery health) but on top of that, my iPhone 6 will also shut down and go into an endless power cycle loop once the battery charge drops to below 20%. iFixit should have given us a warning that their replacement batteries are proprietary and do not comply with Apple's specs (hardware and/or software wise). This really sucks!!!!!!!!!

@awachter if your battery causing your phone to enter a bootloop it is most likely defective. Get in touch with our customer service team and they should be able to set you up with a warranty replacement.

It may not be the battery that is causing the problem, i have the original battery but i messed with the connector when i was working on my device, check your connection between the battery and the motherboard to see if you broke any of the pins that connects the battery.

I have the same problem on 2 different devices in my house. Both of them are iFixit batteries.

I'm not to pleased either. Sort of regretting ordering an ifixit battery replacement now. I just did the install and my phone is fully charged and it's not seeing it's peak cpu performance.

Now I understand it's not ifixit's fault, but I wish this information was on the listing before I hit buy. Guess I will have to deal, but it is frustrating.

There’s any way that your battery capacity will goes back up to 100% or what ?? I know it sounds dumb but I just wanna know if there’s any chance . I read something about it online this girl complete her charge cycle on her iPhone and her capacity was increasing but I wanna know HOW ?

I wish I could find back that article ...

( this is not an answer it is a Question )

One of the options on Apple's website is for them to send a shipping box to you so you can just send your phone back to them. It would mean being without your phone for several days while it's in transit but I'd look into that if you're having battery issues. It won't make it crazy fast, but it should make it a bit better.

I'm a little annoyed that I've lost access to the ios battery health feature too. But even when it was working it wasn't always accurate. My original iPhone SE battery said it was 89% healthy even though it was 2 years old and prone to shutdowns even with throttling turned ON. New ifixit battery is working great. Granted the health feature is still in beta, but still.

The real purpose of the feature is to address the throttling complaints- give users a little more control over it , and cut down on panicked support calls from customers convinced their phone is being throttled. Its helpful in theory but in my case it wasn't working well enough before I replaced the battery to miss it much.

As you use ypur iphone, batteryusage will be reported here..

I replace battery with iphone battery from japan

Is there a moderator of this thread???

I have problem (unable to determine battery health) but on top of that, my iPhone 6s will also shut down and go into an endless power cycle loop once the battery charge drops 1%. This really sucks!!!!!!!!!

Second, no one should EVER let there phone battery drop down less then 1%.

I don't even understand how the phone did not automatically shut down before 1%.

Your question is not a legit question.... because this thread is about after you replaced a battery, the Battery Health is malfunctioning.

in my phone battery maximum capacity - (showing), and it will automaticallty shutdown when battery 100%, and showing battery 1% why