Got the 6s+ on trade from a friend and she said the screen needed a replacement (no cracks on screen and don’t look like it’s been damaged). She threw it on the ground out of anger and the phone it’s self bent slightly (seen worse that still worked) on the logic board (right) side of the phone. I’ve left the phone on the charger for about 45 minutes and didn’t get any activity. Did a basic inspection for simple damages and considering the phones only 2 moths old it’s still basically new. The charger port checks out and is the cleanest I’ve seen one in a long time, taking the screen off to check the internals and everything looks nearly normal. The battery took shape of the bend with the housing and the logic board the same but not enough to effect anything, with experience with bent phones I’m running out of solutions. However the welds for the heat shield for the RAM are broke. (above SIM card and below screen connectors)

I believe the actual part (listed above) under the heat shield wouldn’t have been harmed. But I guess I’m asking if the RAM could’ve took enough damage to cause failure. 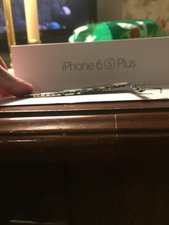 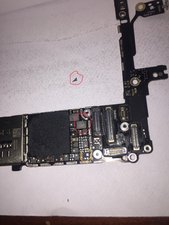 In the cases of severe frame damage that I have seen, there is almost always something affected on the logic board. If EMI shield solder joints are broken, then there is a good chance that there is a crack in the board or components causing it not to boot.

As far as a solution, I would look into a board repair shop that may be able to repair for a reasonable price if it is just a cracked component that is not major (NAND/CPU).

I’ve decided that I’m going to get the table set up and take the board out and see. Now I’ve never had to replace components, let alone take a shield off. I do know how to micro solder but I don’t have the equipment, but you think those welds not being together could be an issue and if I remove the shield to see if anything cracked or fried

If the phone has been looked at by someone else before they may have removed the heat shields to inspect the components on the logic board.

Otherwise if it appears to have become loose from the whole phone being bent significantly then it could also be that the internal circuits on the logic board have been damaged from being bent too much.

You may want to post a picture of it here as the damage may be very significant to the point where the phone may not be repairable.