Can I just switch in a new logic board with no problems?

Hi, I dropped my MBP on the floor and the screen is very dim, almost black (no backlight). And although by shining a torch on it, I can see it’s booting, it’s also booting strangely (into weird screens), and sometimes shutting itself off apropos nothing. I’ve dismantled it and tried reattaching cables (including display) and PRAM reset and everything, but it’s still bad news.

So I’m going to put in a new logic board as – by the way it’s acting, and also the sound it’s making – I suspect the problem is too intense to fix.

My question is: Can I just switch in another logic board (same model of MBP, same serial number) and keep the old hard drive and just turn the laptop on and, hey presto, I have “the same” computer back? How does it work? Will I need to reformat the HD? Will it be able to locate it?

I ask because 6 months ago I tried to switch in a different SSD (from another MBP with the same OS) and my laptop did not like that at all. Although I’m ok on the computer engineering, I really don’t understand the OS stuff.

Basically: I just want to know when I should do when the new logic board arrives.

Adding video of new problem in response to questions below:

In response to Dan’s request above, image captures of battery information:

BATTERY “A”: The battery that was inside the laptop when I dropped the laptop

The laptop & backlight do now work with this battery in (for some reason). But

—  it makes a strange sound (long, slow whirring) when you switch on the laptop

— once it’s booted and you use the laptop, the fans are running very loud.

— The Magsafe is amber — but I think it always has been like that?? (Because it’s a non-OEM battery?) 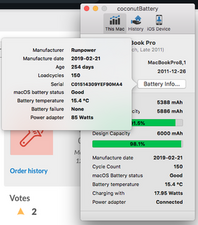 BATTERY “B”: The battery from my spare A1278 MBP. I believe this is an Apple OEM battery.

— Laptop works fine with this battery in. 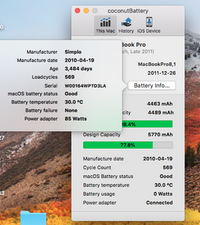 Laptop initially would not recognise this battery when I first purchased it – it wouldn’t boot up. Now, suddenly, it works. But:

— the fans are running very loud

— the Magsafe is orange 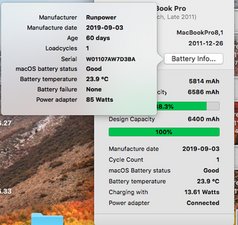 @danj — Thanks for all your input Dan, you're absolutely tireless!

The problem is ... It's now starting going haywire again. Same as originally – no backlight, incredibly touch sensitive (if I so much as brush the lower-left of the keyboard, the display comes on and goes off). Fans going crazy.

I CAN now get it to extend to an external monitor, but it freezes constantly, and if I touch the lower-left of the keyboard, the display flicks off (until I stop pressing on that part of the top case, when it instantly comes back). Interestingly, when pressing the LEFT freezes it, pressing the RIGHT hand side of the top case often brings it back. The fans are going crazy. It also keeps putting itself into sleep mode.

That part of the top case (the LEFT side, by A, S, Z and X) is right above the battery connector. I've run the laptop with the bottom case off and note that (wearing rubber gloves), if I touch the battery connector from below, the same issue occurs – display on and off, and/or the sleep light dims and re-lights.

Given that it's so touch-sensitive, I think it's either (a) something physical (e.g., a loose wire or cross-connection or something loose inside) or (b) something in that quadrant of the logic board has blown (and pressing the top case reconnects it/disconnects it). And given that the issues seem related to display/sleep, it could be either of those cables, or connectors, or both.

Before doing as you suggest above, I'm going to strip it down and reassemble it tonight. I could also try out a new logic board to see if that makes the problems go away. Otherwise, I think I'm just going to have to retire the machine and buy a new one.

Thank you again for everything

@kieronshaw - Well... The batteries them selves appear to be working and your systems charging logic also appears to be working. So I don't see this as your issue with the fan or other noise you are hearing.

When you switch out your battery you do need to reset SMC so the older batteries settings don't get used with your replacement battery. Make sure you do that.

In any case I think we need to look at the systems thermals to see why the fan is running and if there is any issues with the sensors. You'll need to install this app TG Pro. Sticking with your current battery lets see what it shows us. After a good free days post a snapshot of the main window here for us to see. You'll likely need to resize the window to get all of the sensors visible with the fans.

First I’d check to see if the problem is the logic board or if it’s the display.

Connect an external display does it show a clean image?

As to swapping the logic board… You are limited to what this series had:

In any case it will have a different S/N number as you can’t alter it.

@kieronshaw - Well your vid is showing a few new things here the black plastic clutch cover is damaged so I’m assuming the drop is when this broke. So that covers over the LVDS cables connection at the LCD. It’s possible you damaged the cable which is why your screen is winking on and off as it is.

This is clearly not a battery issue. As you are color blind that does make looking at the MagSafe LED a bit harder. For now you’ll need to let the new battery fully charge a good 12 hrs.

In any case you really need to use CoconutBattery to monitor your battery. Forget the menu bar as thats not going to tell you enough.

Please post the snapshot of main window of CoconutBattery I had asked for so I can see what is going on. As you have a few batteries mark them A, B & C and do each one so we can see what is a good battery and what is not.

Thanks Dan. Yes, I’ve reconnected the display cables from both ends, and also tried connecting an external monitor — and nothing. But it’s also making a terrible noise on booting up, and it keeps switching itself off. It also does exactly the same when I put in a different HD.

To my question: Once I install the logic board, will it recognise the former HD? Do I need to do anything beyond installing the logic board and then switching the laptop on?Thanks

Depending on the MacOS version your system is currently running the new logic boards firmware level may need to be updated.

Basically, if you have upgraded to High Sierra and your system had the SSD installed then it's file system was upgraded to APFS from HFS+ In addition the systems firmware was upgraded so the system can boot from the APFS volume.

To be clear: When I connected it to an external monitor it did something slightly different. It booted up, and it did show me the log in screen and (once logged in) the desktop. But about 5 seconds later, the fans started whirring, the screen went black (and said "No display") and then the computer was unresponsive.

But in all circumstances, it then immediately goes black again and becomes unresponsive.

@kieronshaw - What color is the MagSafe plug? Amber or Green

Green for about 3 seconds, then amber