Can I fix MacBook Pro retina mid 2014 dead after overheating?

Background story: Last year I bought a used Macbook pro MGXA2LL/A . The fans have been very loud since the beginning, spinning often and the computer was overheating. I promised I would open it and clean it but stupidly enough I postponed it.

The other day while streaming a movie I saw a spark in the area between screen and main body of the computer, on the left side, and with a loud noise and smoke the mac stopped working. The computer was attached to the power supply (original), which I disconnected. It took me a few hours before I could find the screwdriver to open the macbook and disconnect the battery connector from the logic board. Next morning I tried to reconnect the battery and the magsafe charger, I saw the green light on the charger but no sign of life when turning on the computer, not even the fans (hope this did not make things worse).

I followed the guide here and opened up the macbook. When I removed the logic board I could see a clearly burnt capacitor on the bottom side. Of course the computer was disgusting inside and the ventilation holes where almost clogged, so no wonder it exploded..

My question now is: What is the best thing for me to do to fix the damage?

I have been searching the forums and tried to find schematics to understand what’s the function of that capacitor and what else might be broken but I am very new to all this. I found a similar situation here Blown capacitor on logic board. What is it? so I could find that capacitor, but I would like to understand what happened. Can anyone tell me what is that capacitor for and if it is fundamental, does it make sense that the macbook will not even turn on without it? Or what else should I check to see if the damage is more extended? And is it actually a good idea to try and fix this myself ? (I would like to learn something but I only have basic soldering equipment at home)

I have not tried a repair shop yet because I believe that here (Denmark) they normally just change the logic board (for at least 600€). So I thought I could always buy a new logic board myself and change it (and if I don’t tamper with the old one I can maybe sell it for components?). 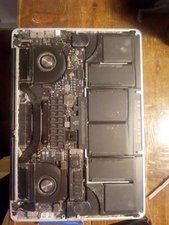 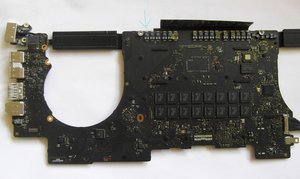 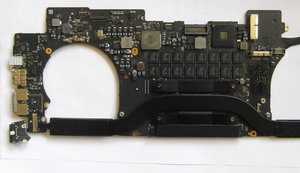 This is not truly easy thing to solve:

First get yourself a better battery. May cause more issues than just sparks.

next get a logic board: MacBook Pro 15" Retina Display Mitte 2014 Logic Board austauschen

or the hard way: possible to replace capacitors but you need lots of tools

you can look for youtube videos of rossmann + macbook repair

if you are in the US try sending to them: http://www.rossmanngroup.com/boards

I am not paid by them or so.

Thanks a lot for the answer, I had not considered that the battery might have been the problem. Does that mean that the burnt capacitor does not depend on the ventilation issue?

Getting a new logic board seems the easier option then?

I have been watching rossmann's youtube channel, it’s very instructive! But I feel I am missing some basic knowledge, I am not really able to do all the troubleshooting but I think I could manage to change that capacitor with what I have at home.

@elenyen Batteries when warm behave badly. Best is post in reddit/askelectronics May be someone can look at the logicboard and tell you...

May be ask the person from other

Blown capacitor on logic board. What is it?