The owner says it goes black after some heavy duty (Photoshop etc.). The machine is still working though, and the picture shows if attached to an external display. She says, if she reboots, the screen stays black. If she waits, the screen works again, but possibly goes black again, this time faster. Checked energy saving preferences: disk and display sleep preferences set on “never”.

So I switched it on today, opened Foto & Photoshop, made it play some HD videos from YouTube etc. for a couple of hours and kept it monitored with macsfancontrol. All temperatures between 36 and 42C except Platform Controller Hub Die which reaches 52C. The fan never kicked in and stays on a solid 1400 RPM, the minimum. Nothing strange, I think.

Then I decided to reboot using an external HD running High Sierra. I believe I hear no chime, the disk light blinks, the screen stays black. So I attach an external display and reboot, keeping Option (Alt) key pushed. The external display shows the picture and allows me to choose the startup disk. It boots.

Flashlight on the iMac display reveals an extremely dimmed picture. So I left it alone until it went to sleep. Pushed a button in order to wake it up, and the picture reappears in perfect brightness, on both displays.

The behavior doesn’t seem to be related to the temperatures, and if the PSU is failing, I would expect the iMac to shut down completely, or am I mistaken? What shall I look for? LVDS cable? Memory modules? Dust? I’m quite puzzled and online I only found cases of displays staying black after sleep.

Can anybody tell me what the heck is happening to this baby?

P.S. Just tried to run the diagnostics. See attached picture. Is there a problem with the SMC? 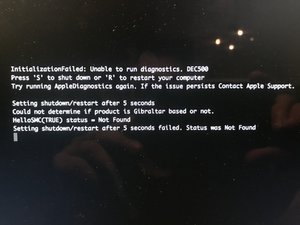 Original content of the SSD cloned, then formatted, installed Mojave and a bunch of programs. All good as far as the iMac works without interruption. As soon as the machine is “warm” and reboots, even after a couple of minutes, the display remains dark, black.

So I started with Option (Alt) and D keys at startup, obtaining the spinning world and after some seconds the error message of the attached picture.

Following another post by Dan, I used the Terminal commands in order to determine the code of this machine (iMac13,1) and the correct AHT dmg for it (00BE6ED71E35EB86) and created a bootable USB drive. Rebooted from the USB drive, I can see the same error as before appearing for a second and then the machine boots from the hard drive. 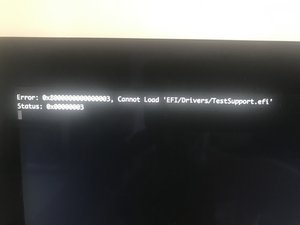 So I ended up creating an external drive with two partitions, used the ASD 3S152 and prepared two bootable partitions: ASD EFI 3S152 and ASD OS 3S152. I tried to boot from the OS one.

A quick flash with the error mentioned above, but then it entered the test interface. First tests were positive, but then again it stops while testing the bluetooth, and I don’t know if and when it continues testing, because at that point the machine is already “warm” and when the test resumes the display remains black.

Another weird thing I noticed: while booting Mojave, I get a dark grey apple and loading bar on white background. As far as I know, it should be a white Apple on black background.

This thing of the display staying dark when the iMac is on since a bit, it really drives me crazy.

Yesterday I decided to remove every doubt concerning the display, so I replaced it with a known good one, including new temp sensor. Nothing changed.

I also tried the installation of Catalina. It failed, maybe due to an “old” installer, but quite odd. I downloaded the most recent one, but in the meanwhile I’ve read that Catalina bricked a few iMac Late 2012, exactly the machine in front of me, so I decided to avoid a new attempt.

In the end, I called a good repair service. The guy was kind enough to point me towards the EFI, which seems to him like being the culprit of the problems of this machine. So this is going to be the next step: EFI reprogramming.

Another service told me it might be one or more capacitor(s) on the logic board. Not sure I want to go down that road.

I will keep you posted.crazy.

I had to wait until the lab re-opened after summer holiday. They received this iMac a couple of days ago, reprogrammed the EFI chip, now the machine is perfectly working again, as expected.

Hope this can be useful to someone.