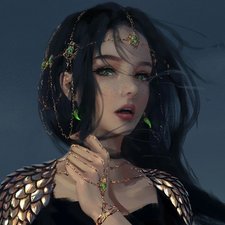 Screen stays black after battery replacement even the phone turns on

I wanted to replace the battery of my iPhone 6 Plus because the battery was discharging very fast. Ordered a new battery, followed something similar to this guide iPhone 6 Plus Akku tauschen and after charging it for a while, it didn’t seem to turn on. What actually happened is that the screen didn’t turn on anymore. Because it still made a sound when plugging in the charger.

So I ordered a new screen that had everything on it except for the home button, followed this iPhone 6 Plus Display tauschen and now it doesn’t even make a sound anymore when plugging in the charger. The screen is still black. I think it still powers on because when pressing volume up/down and the power button it vibrates shortly. Placing back the old screen makes the sound appear again.

I’ve been very careful with disconnecting the connectors and placing back the correct screws. How can I figure out what is broken?

It's a possibility that you blew the backlight circuit. Look at the screen with a flashlight on an angle and see if you can see anything. Make sure to make sure the phone is on an awake. It probably blew a filter or two.

It's the backlight circuit. You will need to take it to a repair shop that does microsoldering. You can mail it in, I would recommend jessa from ipad rehab ipadrehab.com or Jason from sts telecom ststelecom.com they are very good. It probably has a filter or two blown.