Migrate all info including old OS from old int. HDD to new SSD

I’m installing a new SSD in my Mac Mini and I want to migrate my old applications, docs and (importantly) OS 10.6.8 from the old HDD to the new SSD.

If I back up the current HDD to Time Machine, can I install the new SSD and then “restore” it from the back-up? Will it restore the old OS 10.6.8? (Which is what I want).

Or should I put the new SSD in an external USB case (before installing) and “clone” the old internal HDD to the new SSD and THEN install the new SSD?

I do wonder if it makes sense to spend too much on this only system. It’s limited to 8 GB of RAM and the HD SATA port is only SATA II (3.0 Gb/s)

So the SSD you get needs to run at this slower SATA speed. Most SSD’s are now fixed speed SATA III (6.0 Gb/s) which work in your system. Only a few SSD’s available today are able to run at this lower I/O speed. As an example the Samsung 860 EVO SSD makes it clear it supports the older SATA I/O speeds as it will sense the systems I/O and match it we call these drives auto sense: SATA 6 Gbps Interface, compatible with SATA 3 Gbps & 1.5 Gbps interfaces

Make sure which ever SSD you get lists SATA II (3.0 Gb/s) in the spec sheet if it doesn’t move on to another.

Here’s the guide to put it in: Mac mini Model A1283 Hard Drive Replacement

OK, now which way to setup the drive? You’ll want to setup your new SSD using either a USB or FireWire connection. We do have a few issues here as the OS installer you have won’t run as the certificate within it has expired! If you've got an old macOS install image, it will probably stop working today While this mostly talks about the blunder Apple had in the newer releases. Your OS-X 10.6.8 Snow Leopard also has a certificate as well.

So you need to get your system to think its back in time! setting the date 2010 or 2011 depending on your image release. 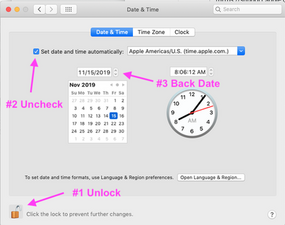 Using your grey OS installer CD/DVD’s and then upgrade it to 10.6.8 using the updates from Apple Downloads Then after prepping the drive use Migration Assistant to copy over your user accounts, apps & data over.