I’ve just bought an A1278 off eBay that has 3682 charge cycles on the battery, which is roughly double the maximum I’ve ever seen on one of these. 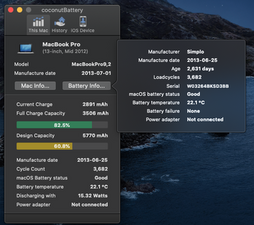 I know Apple says that they’re good for 1000 cycles, but wondered if anyone else had seen such an outlier?

You mean two times and then some!

Time for a new battery for sure! MacBook Unibody (A1278) Replacement Battery

It probability dies in less than 30 mins when you disconnect the charger.

Surprisingly not - I've had it on for the last couple of hours, it's actually genuinely in good health!

Even still I would replace it soon! You are treading on thin ice here. The Design cap is just above 50%, your charging logic is likely running hard and the system is also likely running warm (battery & logic board)

I'd be replacing it anyway, as I'll be selling it at some point soon. I'd not thought about the charging system on the board also running warm, so thanks for that insight Dan.