What is the best way to apply thermal paste? I find it confusing

Hey yall, Mongo here, I got a question.

I’ve been seeing a lot of posts on the internet about people applying thermal paste differently on their CPUs. Some say to make a plus sign, some say to make an x sign, and I don’t really get it. I also read you got to be super careful that no dust go onto the cpu when applying new thermal paste, but I don’t think that’s possible in the environment I live in. (I can’t even apply a screen guard without a little piece of lint getting underneath).

So how do you guys do this? Has everyone just been super relaxed about adding thermal paste and are actually hindering their performance results because they’re technically not applying it correctly? I wonder this. I still got original thermal paste on my CPU from 2012 and it seems to be running pretty well, but sometimes I got to kick the fans in high gear because it gets so %#*@ hot. I wonder if new thermal paste will have it running cooler and faster. Also, what is the best thermal paste to buy? Thank you for your help.

I recommend replacing the paste every three or so years depending on how heavy you use your system, Three for heavy video music work, four or so for light weight users. Also making sure the fans and fins are clean of dusk buildup as well as dusting out the rest of the systems internals.

Lets back up a bit as understanding the function of thermal paste is really the core issue which then helps understand how to apply it.

Thermal paste fills the microscopic pits in the two surfaces to improve the thermal transfer from the heat source (CPU and if present GPU) and the heat dump (heat sink) it is a very thin layer and doesn’t take much! We want to cover chip die (back part) or the metal case top surface fully. We don’t want excess paste to get onto the chip carrier (green part) or into the socket or logic board of the system (desktop).

So it doesn’t take much! But we want to make sure the corners get paste, we also don’t want to capture air as that will stop the heat transfer.

So that’s a breakdown of the most common approaches and the risks for each one.

I personally use the X approach starting in the middle going into to the corners making sure not to over load the corners and not piling it too high in the middle as well. Remember! the goal is to cover the chip die not flood the paste to the carrier which can cause issues.

Also surprisingly the newer Intel i-Series chips which have two dies both don’t get paste! only the core chip gets it not the I/O chip! Remember thermal paste can transfer heat to other places you don’t want heated (extreme heat) Thats the case here we don’t want to overheat the I/O die. 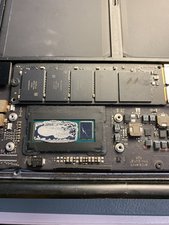 Hint! Practice icing a cake or cupcakes using a piping cone is a great way to understand how to apply the paste!

I hope this gives you the guidance on whats involved.

Thanks so much Dan for a thoughtful reply as always. It is much appreciated.

@crazymanman - If this answered your concerns don't forget to accept the answer - Thanks!