I understand that this is a common issue with new batteries, but I have tried resetting the SMC, calibrating the battery through draining, leaving for 5 hours and recharging but the problem still persists and the Macbook goes to sleep about 3-4 times a day even with Anti Sleep on in the background.

Any suggestions would be greatly appreciated. 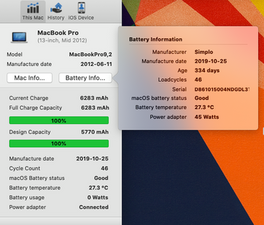 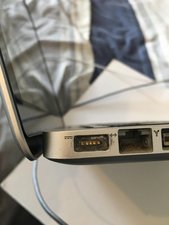 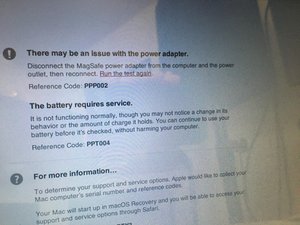 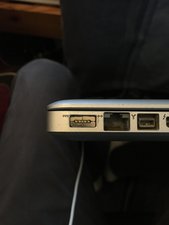 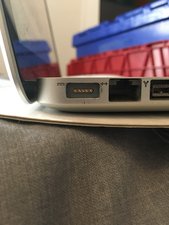 Let’s get a better view of things, install this gem of an app! CoconutBattery take a snapshot of the apps main window and post it here for us to see Bilder zu einer vorhandenen Frage hinzufügen

@danj Hi Dan, I've just done that and added the photo to my OP, thanks,

mmm… This battery is not new (but on the newish side) The amount of cycles tells me you’ve had this battery for a while. Was it working at the start and just now starting to acting up?

Where did you get the battery?

Let’s run the on board diagnostics to double check things. Restart your system and press the D key to enter into diagnostics did you get any errors

I think you have a deeper issue here. As your cycle count seems high for only using it for 4 months or so.

Do you tend to run the system on battery Vs leaving it plugged in? So you let the battery run down then charge.

Let’s also look at the MagSafe port is it clean and the pins the same gold color?

I often see people who bought knockoff chargers damage their systems either at the MagSafe port or internally the charging logic gets damaged. Is thins the original charger or did you replace it? Did you get a REAL Apple unit directly from Apple of something else?

Oh Boy! The MagSafe cable’s magnets are stuck to your systems MagSafe connector! These magnets look like a knockoff’s charger not the original Apple design which uses a single magnet Vs four units you clearly have here: 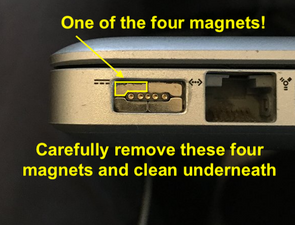 If you can’t get them out you’ll need to replace the MagSafe DC-In board MacBook Pro (13 Zoll, Mitte 2012, Unibody) MagSafe DC-in Board (Gleichspannungsversorgungs-Platine) austauschen iFixit is out of stock presently MacBook Pro Unibody 13" and 15" MagSafe DC-In Board, even still take a look at the part to see part rotate it around so you see a side profile, note the connectors pin part is raised above the base and the base has a grey plastic plate.

You will need a new charger! Make sure you get a REAL Apple charger Apple 60W MagSafe Power Adapter (for MacBook and 13-inch MacBook Pro)

Knockoff’s can hurt your system! Don’t buy them.

I purchased the battery in April here from iFixit. Soon after I got it, the laptop would sometimes shut down completely, after some tries at calibrating the battery, it seems to have stopped that but now just goes to sleep a few times a day. It usually happens when it's idle and I'm just listening to music but from time to time does happen when I am actively using it (trackpad, keyboard).

I've added both photos to my OP. I ran the test without the power so it seems like there is an issue with the battery.

@tommyboy_818 - Wow your MagSafe connecter is almost black with junk! Time to get a pile of cotton swabs and isopropyl alcohol. to clean the black stuff out!

Hi Dan, I will certainly clean the MagSafe connector but the Macbook still goes to sleep irrespective of it being on charge

@tommyboy_818 - The PPT004 error is telling me the MagSafe connection is having issues which we need to fix first. Then we can reset the SMC to clear the bad charge data it currently holds. This should fix your running on battery issue.

Did you charged battery fully?

@petercoffin80 - The problem is these odd magnets are interfering with the good MagSafe charger from mating! So without removing them to make space for the MagSafe cable connector the system is not able to be charged.