iMac bottom half screen is black with lines and glitching

A week ago, there was an outage in my city, my imac turned off and then restarted again, it was pretty violent so I turned it off. Later in the night, I turned it on and everything was working fine, after a while the screen flickered a bit, and turned black, yet everything else was working, i was listening to music in youtube and it kept playing, buttons like volume an play/pause were responding. I pressed command+option+eject to put the imac into sleep mode, immediatly i moved the mouse to wake it up and the screen seemed ok again. I kept working yet the flickering came back, a little bit more frequently this time so I started checking things out, I found out that if i set the screen brightness at its lowest, the screen would stop flickering. Not a solution but good enough to keep working.

Next day I turned it on and things were pretty much the same, I read a bunch of posts and came across with a weird solution, change the size of the mouse pointer. It seemed silly but a bunch of people voted positive so I gave it a try. Surprisingly, it worked. Everything was fine, I could increase/decrease the brightness without any glitches.

After a couple of days, the flickering came back, for a milisecond the screen would go black, these happened around 3 times, then the apple logo appeared on a black screen like when it starts up, so I run the command to put it into sleep mode and wake it up again. Everything was back to normal, now this happened another couple times before the bottom half (and a little more) of the screen went black and glitchy with purpleish colors. The top half remained almost normal except for the right corner where there was a purple shadow, subtle but noticeable. I noticed that when I changed to an app with dark background or dark elements, the damaged area went all black with subtle glitches 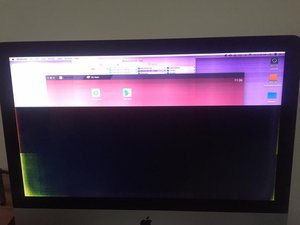 when changed to an app with white background, the damaged area would be less ‘damaged’, I could see the colors and things on the screen behind that damaged area, blurried and glitchy but visible. 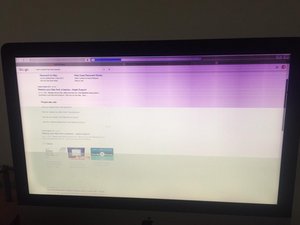 I tried to reset smc, pram, start on safe mode (forgot to mention that I tried all of this the first time the flickering started), the sleep/wake trick, the mouse pointer trick, tried to decrease brightness (this time it would make the glitch even worse), nothing worked. I also tried reinstalling the OS, didn’t work, updated it to the latest version, nothing changed. This is how it looks now. 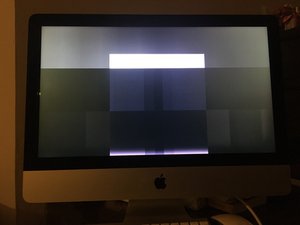 At this point, and after reading A LOT, there are some things left to try, clean air vents, which are clean but just in case. Hook it up to an external monitor and see if it’s a screen problem or rather a faulty gpu, except I don’t have one, nor the cable to connect the imac to a laptop at least (not sure if it’s even possible). Open it up and see if t-con (read on macbooks threads not sure if imac even has one), lsvd cable (sorry if it’s spelled wrong). Also, I’ve read that overheating could be a cause, yet macs fan control showed that temp sensors were measuring an average of 45°c for some components, and others were even at 33, so I don’t think it could be related to overheating (unless those temps are indeed higher than usual).

Anyway, all of those (except for the vents cleaning) I can’t do, mainly because I don’t have the necessary tools/knowledge/adventure-feeling. I’m thinking on sending it for a repair but before doing that I just thought that maybe I can give it one last shot. So, and sorry for such a long story, what do you think it could be? any previous cases you’ve heard of? sounds like a software issue or rather a hardware one? what should I expect technicians to tell me (so I can avoid to be surprised/foolished)? in my city/country there are just a couple apple certified repair centers, one already closed due to the pandemic, and not sure if the other one would actually repair just what needs to be repaired, instead of replacing more expensive parts or such.