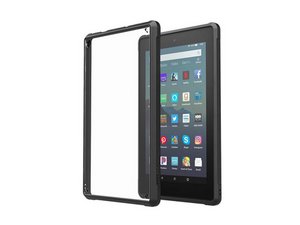 Factory reset will not perform.

Unit has a full charge. Normal power on results in Amazon logo then fire screen with 3 dots which light up in succession and does not progress beyond that screen. Holding power and volume down button results in Android Recovery screen. Amazon/mustang/mustang 7.0/PS7315/1961N

When I scroll down and choose wipe data/factory reset the result is a series of errors. The first error is E:Failed to mount /cache; formatting: I/O error followed by other similar errors. I tried choosing wipe cache partition and got similar results. I’ve tried this plugged in to an amazon kindle rapid charger with the original cord, unplugged, and plugged in to a computer; all have the same result. The computer acknowledges that a device is plugged in with a tone but can’t communicate with it enough for a screen to pop up or for it to show up as a storage device.