I’ve been repairing controllers for a while as a hobby, mainly joystick drift, cosmetic damage or other minor repairs some people don’t want to do.

I bought this switch pro controller on eBay which was listed as faulty. Someone had already tried to repair this as the pad on the middle pin for the vertical potentiometer is missing off the board. When plugged in to my laptop using Gamepad tester it works horizontally but won’t move up or down. I’ve tried to replace the analog to rule that out but unable to solder that middle pin which I think might be causing the issue. I have opened up a working controller to see what the pad would connect to if I could possibly run a jumper cable but at a bit of a loss as I can’t see any tracers. I assume it would connect to power which would then trigger which way you move the joystick making the connection either way? 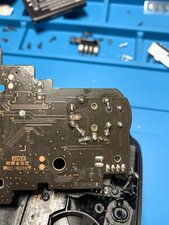 Any help would be appreciated as I can’t seem to find much when searching and most results just come back regarding drifting which isn’t the case. 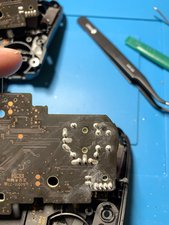 so you could try to run a jumper like this : 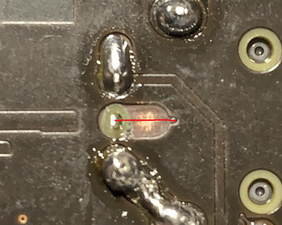 You can try to replace the pad as well which have more chance to works but it seems quite hard to do,

here are some tutorials :

I’ve not tried that yet as when testing continuity on the exposed PCB, it connects to the ground pin on the analog (2nd pin up from the damaged one on that pic) but when I tested it on a working pad it didn’t connect to that pin. I could try it and see if a jumper will hold then test to see if it works!