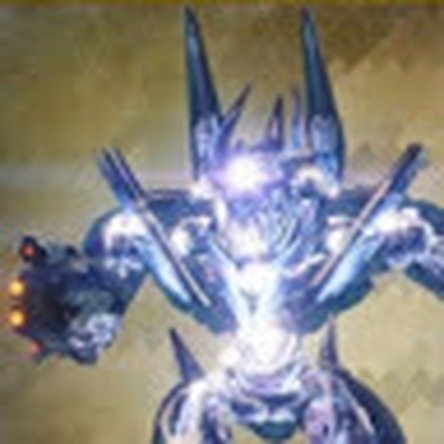 Water damage, how to test if SSD or contacts are faulty?

I recently got a MacBook Pro which I was asked to check if it could be fixed.

The laptop suffered water damage a while back, but still functions with the exception that it cannot detect the internal SSD anymore.

The internals look ok, except for some residue on the battery chip, but I’m not sure if that’s causing the issue. (I believe it’s simply leftover glue from the plastic cover that should have been there originally. (It was already removed when I opened it.))

How can I test if the SSD is simply faulty or if oxide (or something else) is to blame? 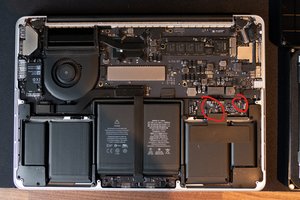 P.S.: Unfortunately I do not have a spare SSD with that specific interface to test.

UPDATE: Added a picture of the underside of the logic board. No clear signs of damage. There is a light stain, but I’m not sure if it’s due to the water. 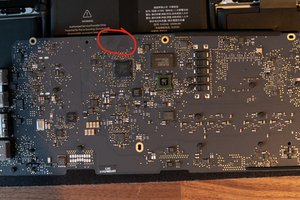 Have you taken the board out of the case to check the other side for corrosion.

@tech_ni Yes, but I didn't take a picture of it. There was a slight stain on the other side, but it wasn't clear if it was due to the water damage or not. I'll take a picture later if I take it apart again.

Try booting from an external USB drive. The last water damaged retina I got in had fried the storage board and I had to order a new one from Other World Computing and that fixed it. Of course you do need to disconnect the battery and remove that corrosion first.

The laptop works normally with a external hard drive, but that's not very practical.

I can't see any visible signs of corrosion, but was wondering if there's a way to test this before I order a new drive. (Maybe test the connections with a multimeter? Just not sure how to do that.)

Boot from your external and run Disk Utilities on the internal drive. If it fails to mount you may have to reformat it and re-install a system. Now try to boot from the internal.

@mayer I already tried this. The internal drive simply doesn't appear anymore. All it shows is a 1.33GB disk0 which is a system reserved disk that contains the OS installation files (which I assume is a small chip somewhere on the logic board and not part of the M.2 SSD which can be replaced).

@mayer True. :) But I did just test it by removing the SSD and booting up without it. The disk0 still appears, so it is a seperate physical 'disk'.