iPhone 7 Plus Logic Board Repair

In the process of replacing the Baseband Power IC on the iPhone 7 Plus’ logic board (an attempt to resolve the phone being unable to activate) and reballing its base, I’ve accidentally dislocated and removed 7 adjacent capacitors as well as a smaller chip to the right (viewed from the orientation of the photo), in addition to the Baseband to the left being damaged/unaccounted for. 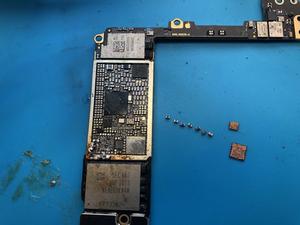 How would I go about replacing all of this? Are these capacitors (and their sides) identical, and what’s the likelihood of the phone being rendered unusable even after they’re replaced? Would help if there’s a detailed diagram of parts on the logic board (inc. names of all parts) available.

Thanks for any help.

There is schematics and board view software for that model of phone, they will display the components and there values. However since this is the Qualcomm board and not the intel the unable to activate message will more than likely be a shorted baseband CPU it is a signature fault on this phone.

Apple even had a replacement program for this fault but it is no longer continued. The baseband CPU is not replaceable as it is linked to the CPU.

Seems like you knocked off some important baseband related caps, you need to install them and also you knocked off the homer ic which controls vibration. You need to reball that and fix that too. Hope this helps :D