2017 MacBook Air not charging/won't boot unless plugged in. Help

The “question” may be a bit confusing so let me explain.

My bro-n-law told his co-worker that I might be able to assist with fixing his 2017 Macbook Air (A1466). He brought it to GeekSquad and they were going to charge him almost $500 for the repair. The description of the issue was simply that the the unit will no longer charge. He attaches his Magsafe power cable and the status indicator lights don’t come on and the laptop won’t charge.

Once I got it the first thing I did was plug it in using my charger. The laptop immeidately began charging. I thought maybe his charger took a crap and GS was charging him $500 for a charger. However, upon trying to show my bro-n-law through a video that it was working, I unplugged the laptop and plugged it back in and it would no longer charge. It was at 42% at this point but it simply wouldn’t take a charge. It did stay powered on.

I also have an A1466 but a few years older. I no longer use it so figured I could use some parts on it for diagnostics. The first thing I did was plug it in to make sure it was working. I first thing I pulled from my unit was the I/O board and swap it with his. That didn’t remedy the issue. I also installed his into mine. My laptop took a charge with no issues. That’s with connecting and disconnecting several tims.

I then swapped the batteries. Again, his laptop wouldn’t charge but mine would.

After swapping both parts, on rare occassion I could get it to charge but it would once disconnected and reconnected.

I decided to swap all parts back to original and NOW what’s happening is his laptop will not boot unless it’s plugged in and as soon as it’s disconnected it powers off. Here’s the kicks part. It WILL “charge” now. The status light comes on the Magsafe and everything. I don’t think it’s charging anything though but the status indicator always comes on now.

I’ve since performed an NVRAM Reset.

Follow this guide MacBook Air (13 Zoll, Anfang 2017) I/O-Karte tauschen to take it out to inspect and clean or replace.

@jd_guthrie - Time to take the logic board out to inspect the other side for liquid damage. Follow this guide MacBook Air (13 Zoll, Anfang 2018) Logic Board tauschen

Inspect the Blue & Brown chips marked here (click the image to get a better view) as well as the componentry around them for corrosion or any staining. As its a sporadic issue it could even be a cold solder joint if you have a hot air workstation reheating the area with a good flux should fix that. 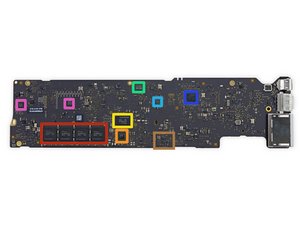 I swapped the board with a known, working board and the results were the same.

I will take a look at this when I get back in front of it. I do not have a hot air station, unfortunately. The only "board level" repair I've ever attempted is to replace joysticks on an xbox controller. I was able to do that with a soldering iron. I'll follow-up with my findings.