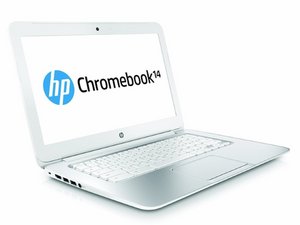 Repair guides and troubleshooting for the HP Chromebook, an 14 inch HP-brand laptop computer that runs on the Chrome operating system (OS).

Not able to charge or turn on.

I've used the wrong charger more than once. I used my Samsung fast charge on my Chromebook. I never had a problem until it was at 1% and I used a phone charger to keep it on while I use it. This caused it to not accept a charge at all now. The LED light doesn't even come

on. I tried a new battery with no luck. Still no led light to indicate a charge. Perhaps a short?

You would need to open up and measure some components to see if the voltage reaches the motherboard at all.