[Warning: Long backstory included; Scroll to the middle-bottom for Details]

I'm tyring to upgrade my 2010 MacPro 5,1 WiFi & BT. I bought a PCI-e Card to do so. my MacPro is running 10.15 Catalina. MacOS, along w/ a metal compatible graphics card, was upgraded when I bought it. It was already prompting me to Install OS 11 Big Sur. I'm new to the MacPro, so I was nervous about updating to a new OS right away. I know it took a lot of software patching, firmware flashing, & the hardware upgrade to get it to the point it's at now. I'm not very fluent with software patching, boot loading, bios, non-native drivers, etc, so I was nervous about going further. My WiFi was a little spotty in performance, but I wasn't 100% sure if it was the Mac, the router, or the WiFi service. My Bluetooth was working great, including being able to use the newest Apple Magic keyboard, trackpad, and mouse. I've read some people saying the BT in these had to be upgraded to use the new Apple magic accessories. But, mine were connecting and working flawlessly, on what I'm assuming was the original BT module (pic below). 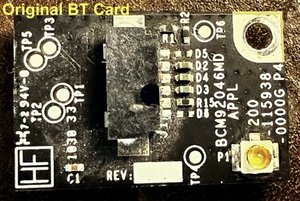 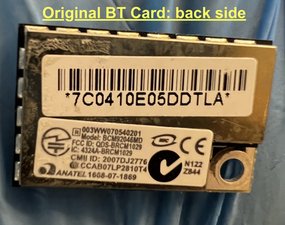 I was missing the BT continuity features (handoff, Airdrop, watch unlock) that I'd gotten used to on my MacBook. However, the Wifi and BT were functional enough for me not be worried about upgrading them yet.

Then, all of a sudden my WiFi quit working completely. Checking my system profile, it was like the wifi card was nonexistent. I don't know if this was related to hardware going bad or a software issue. I was told by the seller of this MacPro that most likely an Apple OS update wiped out a software patch that was allowing the old wifi card to be supported in 10.15. He also led me to believe that he'd help me resolve the issue but then he promptly cut off all contact & won't return my calls, texts, nor emails. He had 'given' me a "1 year warranty" with the sale. I geuss some problem don't have a problem with Not Honoring their word.

So ... I am attempting to upgrade the Wifi & BT myself. I'm much more familiar with doing hardware upgrades than I am with software. I knew it would take hours for me to learn about & install whatever software patch I needed to make my old wifi card work in OS 10.15. I figured it would be easier to simply swap out (or install) newer hardware that would be plug and play, naitvely supported by the OS. I should have known that my lack of familiarity with MacPro hardware would sabbotage me. I thought just installing a combo wifi/bt PCI-e card in the PCI-e slot up top, intead of replacing both individual wifi and bt cards down below would be super easy. You just plug it in and go, right? Not so much. I failed to realize that I'd have a BT cable to plug in seperately, and nowhere up top near the PCI-e slot to plug it in. So, right now my MacPro is almost completely disassembled and I've learned a lot about its hardware! But, sadly still not enough to finish this project. There is one lingering peice of information I need to complete the project & put everything back together. Hopefully, I'll have a fully [more] functional Mac at the end.

I went with a PCI-e slot Wifi/Bt card, rather than using the original stock location (which I think is a mini PCI-e?), for the sake of having external antennas & (mistakenly) thinking it would be an easier install. I did not realize the BT connection it came with would be incompatible. The card I got is either Fenvi Model # FV-A436CD or Fenvi Model # FV-946CD. The model # listed on eBay and the #s/images on Fenvi website don't match up accordingly. It is intended for a Hackintosh application which has a motherboard USB plug available for the BT to plug into.

I have been trying to figure out how to connect the BT cable, coming off of the PCI-e card, to the old connection for the original BT card. I was planning to cut and splice into the factory wire that attches the original BT card to the motherboard. But then I found an ifixit thread that identified the appropriate plug that fits the motherboard BT socket. I ordered it & am waiting on the plug to arrive. But, I still need to know how to splice the wires onto my new BT card's cable. I don't how to match up the wires/pins from my new BT module to the wires in the plug that goes into the motherboard. Both have 4 wires. I'd assume they'd have the same function, but I am not sure, nor do I know if they are in the same position/order.

Can anyone help me answer this so that I don't mess it up when splicing it? Does anyone know the pin line up of the socket that the original BT card plugs in to, on the motherboard?

Here are the labels I've found, in case anyone can decipher them for me. 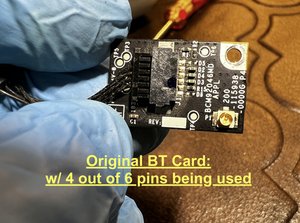 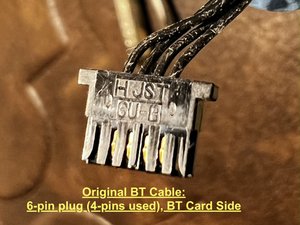 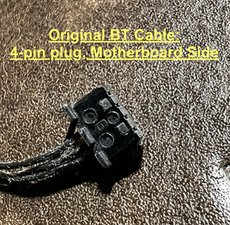 This is a BCM92046MD Card. I cannot find the pin layout using that model #, ANYWHERE. I've found quite a few other broadcom card pinouts, but not this specific one, and not any other ones with only 4 pins being used.

Since I'm going to splice the 4-pin plug onto the 4 wires from my new BT card, I've got to get the wires matched up in the correct order, based on their function. But, I don't know their function. I'm afraid I'll screw something up or short circuit something if I accidentally do them in the wrong order.

The 4 wires from my new BT card are currently housed in a 'standard' 9-pin USB interface with 4 wires being used. Although, I have seen some other versions only using 2 wires, and not all 4. Mine has all 4.

The seller told me the pinout for that cable is standard for USB 9-pin cables. 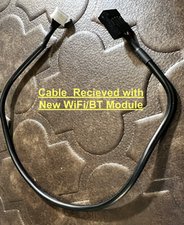 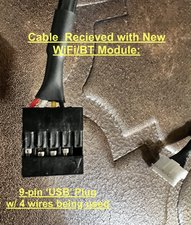 How do I match up this new BT card's 4 wires to the existing original BT plug & socket on the 2010 MacPro's motherboard?

Does anyone know how the new wires would coordinate with the existing socket?

Is it even possible to determine this from the pin labelings on the original BT card?

Thank you for any help & advice you can provide!

I will be extremely Grateful!