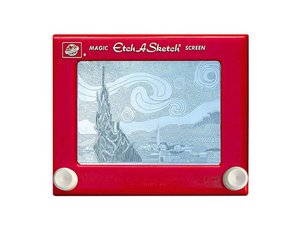 The Etch A Sketch is a classic drawing toy that was invented in the late 1950s and is still popular today. The toy originally sold for $2.99, which is equivalent to about $26 as of 2019. The Etch A Sketch sold over 60,000 units in just a year and became one of the most popular toys on the market. It was inducted into the National Toy Hall of Fame in 1998. As of 2019, the Etch A Sketch has sold over 100 million units throughout the world.

While there have been various iterations to Etch A Sketch design over the years, the classic Etch A Sketch is red in color. It is a flat, rectangular surface with a drawing screen housed in an encasing. There are two white knobs on the bottom edges of the frame, allowing for user control of the drawing surface.