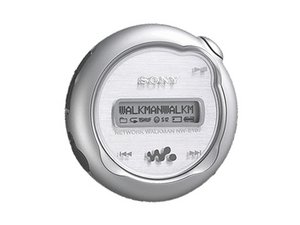 Repair guides and specifications for the Sony Walkman NW-E107, released in 2005.

The Sony Walkman is a brand of portable media players first released in 1979 which found enormous success throughout the 1980s and 90s and is still in development as of 2020. The cassette Walkman was really where the brand became a household name, with over 200 million cassette-based Walkmans manufactured until its discontinuation in 2010. The Discman, released in 1984, was SONY’s first compact disk-based walkman and was rebranded in 1997 to CD Walkman. SONY’s first MP3 walkman did not come out until 2004, and in 2005 they released the SONY Walkman NW-E107, an MP3 player that featured a backlit aqua LCD, and supported a variety of audio files, including WMA and WAV. Good Gear Guide states in their review of the Walkman NW-E107, “The 1GB Sony NWE107 Walkman is a light and stylish device that has two standout features: its excellent battery life and compact size. “

The Sony Walkman NW-E107 is a very small device, small enough to fit in your palm, and the body can be a variety of colors, including dark blue and gray. The front includes the LCD display, and the skip forward, backward, pause, and play buttons. The Sony Walkman logo is above and below the display. The audio output is in the top right of the device and the computer input port is on the bottom left. There is a menu button on the back of the device, as well as a slider to expose the batteries. Sony SonicStage software is required to use this device with your computer.