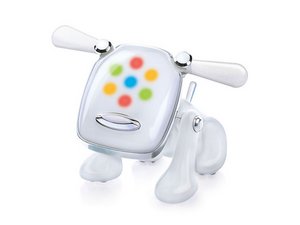 First released in 2005, the iDog is an MP3 toy manufactured by Sega and distributed by Hasbro in the USA.

How to Disassemble an iDog MP3 toy

First introduced in 2005, the iDog is a MP3 robot dog toy designed and manufactured by Sega. Distributed by Hasbro in the USA, the iDog is designed to interact with music by showing different lights and movements. Once the toy receives input from an external music source such as an MP3 player or an external speaker, it will illuminate and dance along to the music’s rhythm. In Germany, Italy and the Netherlands, the iDog is marketed as the eDog.

Powered by AA batteries, the iDog features seven flashing LED lights on its face which illuminate different colors as the robot toy moves or “dances” to the music. These moves include the toy shaking its head and wiggling its ears. Moreover, the iDog has several switches on its nose, head, and tail, which allow the toy to react to the user’s input. The iDog also has numerous emotions which also change based on the user’s interaction with the toy and can be understood through the different LED color patterns.

Between March and April of 2005, the iDog began shipping worldwide and was available until 2009. During its time, the iDog had several variations including a sports themed iDog, part of the iDog x Atmos line, released in 2007. There was also the iDog Pup, a puppy version of the original iDog, the iDog Mini which was released in Japan, and the SpiDogs which were released to promote the Spider-Man 3 film.