The Touch Bar generation of MacBook Pro always had its quirks, but the thin-at-all-cost design may finally be proving more trouble than it was ever worth. The latest issue to crop up—dubbed “flexgate” by one of our users, Alex—reveals that the compact design for the display’s flex cables is prone to fatigue and failure, leading to a host of display problems that can’t be easily (or cheaply) fixed.

Of course, any product produced at the scale of the MacBook Pro is bound to run into a few QC issues—that’s understandable, providing the company can own up to them and repair or replace the affected users’ machines. But for most of us, there’s a limit to how many unnecessary repairs we’ll put up with on an expensive “Pro” laptop. Problems like the keyboard (which has, thankfully, been at least slightly addressed by Apple), poor thermal performance, and questionable battery performance and lifespan point to a bigger picture: This MacBook Pro design is a bit too far on the form side of the line between form and function that Apple is known for walking so well.

With that bigger picture in mind, let’s address the latest problem—which, to me, is the nail in the coffin for these laptops.

None of the Lights

The issue is fairly simple: the current generation of MacBook Pro laptops (2016–present) uses flexible ribbon cables to connect the display to a display controller board beneath the Touch Bar. These cables wrap over the board, where they’re secured by a pair of spring-loaded covers—and they’re subjected to the stress of bending with every opening and closure of the laptop. Within a seemingly short time, those cables are starting to fatigue and tear. The backlight cable is generally the first to go, producing the infamous “stage light” symptoms, and eventually giving out entirely when the laptop is opened more than about 40°.

When it first debuted, the design seemed fine. But as always, the devil is in the details. Apple opted for thin, fragile flex cables as opposed to the beefier wire cables used in previous designs that could be routed through the hinge instead of wrapped around it, helping mitigate the stress of repeated openings and closings. But the bigger problem is that, in an apparent effort to make the display as thin as possible, Apple designed the cables as part of the display, so they cannot be replaced. This means that when (not if) those cables start to fail, the entire display unit needs to be replaced, as opposed to one or two little cables—effectively turning a $6 problem into a $600 disaster. Our good friend Louis Rossmann captured the problem on video; can you sense his frustration?

This problem is frustrating on multiple levels. It certainly feels like this could have been avoided entirely if so many sacrifices weren’t made for the thin-and-light form factor, and it definitely could have been avoided if Apple had just made the cables modular (which may be another thin-and-light compromise in its own right). Perhaps the most frustrating aspect is Apple’s slowness to acknowledge the problem and make amends with customers. A few determined folks have managed to get their local Genius Bar to replace their screen on Apple’s dime, but for now it seems that for every person who succeeds, many more are rejected—or simply end up paying for a new screen out of pocket without realizing how widespread the issue is. There are also multiple people who claim to have started threads on Apple’s support site only to have them deleted.

For now, the issue is only affecting the Touch Bar generation of MacBook Pro. The new MacBook Air doesn’t use the exact same display cable design, but it looks to have a similar vulnerability—its cables wrap over their display board, and appear to be part of the display. We’ll have to wait to see if they exhibit the same cable failure, but color us “not-surprised” if they do. 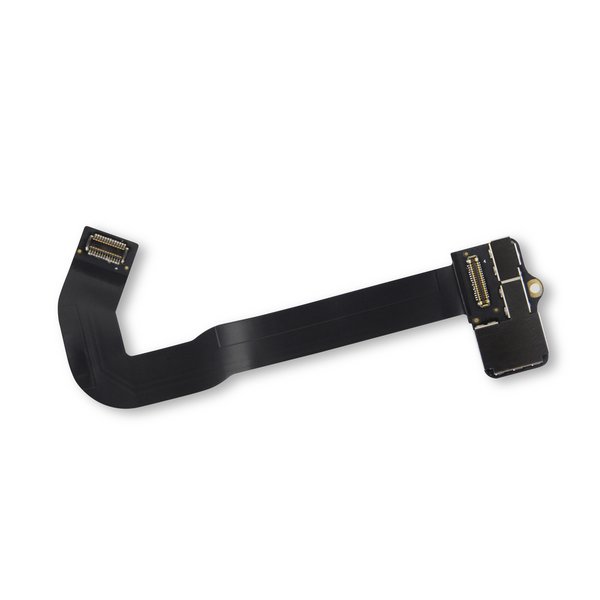 Replace the cable that connects the display portion of the touch bar to the logic board.

Alex has started a petition in which he “kindly ask[s] Apple to launch an extended warranty program addressed to this issue as soon as possible.” The petition is currently hovering around 2,000 signatures. If you are affected by this issue, or if you (like us) have passionate feelings about repair and how long a $7,000 laptop should last, let us know in the comments, give Apple some feedback, and add your name to the petition.

We have two MacBook Pro Touch Bar laptop. Number one is the original late 2016 version (purchased 1/2017) and the other is the late 2018 version (purchase 9/2018). The screen cable failed after three month on the 2018 laptop - there was a delay in fixing it because I was told that replacement screens were not yet in the pipeline to the authorized repair services. It was fixed in February 2019. In June 2019 the 2016 laptop suffered the same display problem. Apple replaced the screen at no cost (it is still covered under AppleCare). A question is whether the replacement screen has the same cable as the original. Or did Apple “improve” the cable for these replacements?

I got my screen replaced by Apple due to the StainGate problem on my 2016 Macbook Pro purchased on April 2017. I got it replaced on September 20th 2019 on apple’s dime. Then 7 months later, the replaced Screen suffered from the stretch gate issue! I am at the moment furious at apple that refuses to fix it due to the fact that they claim a 90-day warranty on replacement parts! Also.. stains have already started reappearing on the screen too!

So, judging by the fact that the flexgate is still an issue on the replacement screen and the fact that stains still appear on the screen.. no, apple uses the same problematic screens on their fixed laptops and they try to hide behind a 90-day warranty and get away with it. It’s scammy at best.

the flexgate issue with my macbook pro touch bar 2016 happened today after 2 years of use.Thank you apple giving us a headache …i lost confidence to any future apple laptop they will be designing and will just get a heavier but reliable older 2012 macbook pro.

Check if the repair program is till up, because one or maybe two month ago I went to an apple store and they repair the problem for free under a repair program they had.

Now that mine is fixed the question I have is if they fix it putting the 2mm longer robin cable or they just replace it with the same short one it had at the begging. Still does not find anywhere that anwser…

Here is the link for the Service Program: