We’ve all seen Rosie the Riveter: blue coveralls, red polka-dotted bandanna, biceps blazing. Rosie is a cultural icon, used to mobilize women into manufacturing during World War II. But sixty years after Rosie helped recruit 3 million women into war plants across the US, many women still seem reluctant to pick up the riveter. 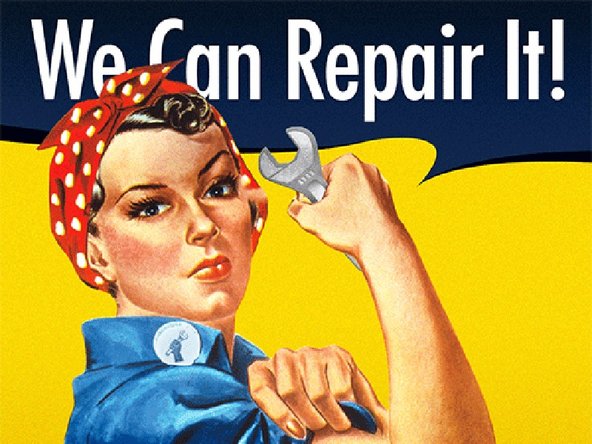 Women make up over half of the population. So, why aren’t there more women repairing? Women are underrepresented in many fields—especially technical fields. In 1997, women earned just 33.8% of degrees in science, technology, engineering and mathematics (STEM). By 2007, that number had dropped to 27.5%. As a woman in STEM, I’ve thought a lot about what stops women from joining our ranks. Maybe women don’t replace their hard drives for the same reason they don’t often change a tire: lack of confidence.

Evidence continues to mount that capable women in technical fields have less confidence than men that they will be successful. Researchers at Stanford University recently published new findings that women engineering students perform as well as men, but are more likely than men to switch to a different major. These women switch because they don’t believe that their skills are good enough and they don’t feel like they ‘fit’ in engineering.

Women face a stigma in technical fields because, as Cohoon points out, “most people assume that men are better than women at technical things.” The study revealed an even stronger stereotype in non-computer majors: “Male non-computer majors have more confidence in their computing skills than do women computer science majors. This finding shows that students believe being male bestows more computing skill than does studying computer science.”

Stereotypes are not an accurate barometer of truth. Women do have the skills and the resources to repair—we just have to give them the confidence to flex their repair muscles, like Rosie. We want our guides to be so clear “that your grandmother could do the repair.” While this statement is blatantly sexist (we know at least one grandmother who could run repair circles around most people), the real question is, would most grandmothers have the confidence to even try?

Just giving women the opportunity to repair is the first step to closing the confidence gap. Women should be presented with opportunities to build, fix, and make in classrooms, at work, and in home environments. And the younger they start, the better. There’s no reason a toolbox has to be a toy just for boys. We’ve helped plenty of young girls fix electronics. Once they get started, girls take to repair just as quickly as the boys do. We also have to give women a fair chance, which means a fair chance to fail without judgement. Recognizing that these judgements are based on false perception, not on fact, is the best way to take down the stereotype.

Every woman must know that she can fix the world. She must be encouraged and empowered to be bold, not afraid to grab a spudger and gut her gadgets. Our mission is to give every person the power, authority, and know-how to repair the stuff they own. But, until women join the repair ranks, we can only expect half success. That’s not enough.

We can’t just look at Rosie as a symbol of a bygone era. Instead, we should view her as a very modern repairer of gender equity and consumables alike. Rosie’s message is one of confidence and empowerment—the same message that women today need to hear about repair: “We can do it!”