Even if you manage to pick up an old film camera that’s working and mechanically sound, you’ll want to do a little fixing up. You don’t need to strip the thing down and lube it up, but you should replace the light seals, the mirror damper pads, and maybe do some basic cleaning. Then you’ll be ready for your first shots on film.

In part one of this series, we picked up an old Olympus OM-2n, a manual 35mm film SLR that was in mostly great condition, but had a jammed shutter and film winding lever. In part two, we tracked down the problem, while causing a few of our own along the way. This time, we’re getting the camera up and running. We will add a lens, test that everything works, add those seals, and drop in film.

Most film cameras seal the rear door against light leaking in and ruining the film with a light trap, along with either foam or squishy cord. Some modern cameras forgo any seal, relying on interlocking channels in black, which are enough to stop any stray light bouncing in.

Replacing foam is a bit of a pain, but straightforward. You scrape out the old gunky foam, and stick in the new. It’s best to stick with whatever was there to begin with. Yarn or cord is easier to fit, but is less squashy, and might put strain on hinges as you force it shut.

Foam comes in both pre-cut kits (for popular cameras), or in a sheet that you cut yourself. I opted for the sheet, as it works out way cheaper, and you have plenty of left over for the next project, or in case you screw up this first try. I used self-adhesive peel-and-stick foam. You can also find foam that requires glue.

The glue option might sound more involved, but the sticky-backed foam can be hard to control. It sticks to the sides of the channel instead of to the bottom.

Google your camera model to find out which thickness you need. It’s likely to be 1mm, but could be a bit thicker. I used 1mm for this camera.

Once you’ve scraped the worst of the gunk out, it’s time to call in the chemicals. You can try small amounts of lighter fluid (naphtha), or isopropyl alcohol. Alcohol proved best for me. A Q-tip will be too big, but you can snip off a bit of the cotton, and use a matchstick, or a chopstick, to scrub the channel clean (or, ahem, a trusty spudger – Ed.).

To make this easier, remove the camera’s back if possible, and tape a scrap of card over the shutter to protect it.

Take your time. You want to get the surfaces as clean as possible before you apply new seals. It’s important to remove all the gunk and foam that’s there already. The seal might look okay, and still make a decent seal against the light, but it will gradually flake off and gum up the shutter. You only want to have to do this job once.

For the stuff that doesn’t come off easily with fluids and soft tools, I found the best tool to be a small screwdriver. It can scratch the underlying metal, but that’s being covered up anyway. I also whittled the end of a chopstick to make a chisel-tipped scraper and foam presser. What can I say—I love improvised tools.

This is the trickiest part. Or the second-trickiest, as we’ll see when we get to the mirror. You need to cut thin strips of foam—try a steel ruler, a sharp craft knife, or a box cutter/utility knife). Then remove a small section of backing, and finagle the sticky foam into one end of the channel.

I found that if you get one end in place, you can peel back a section of a few inches, then pull it taut over the channel (don’t stretch it), and then use the edge of your ruler, or your chopstick’s chisel tip to push it home. If it doesn’t work the first time, the glue on the foam can stand a few attempts.

Make sure you fill up all the channels, and pay attention to the counter-reset switch. This will probably be up at top right, near the shutter and film winder. It’s a small switch that sits in the channel, and triggers when you open the back, resetting the film counter to zero. I tucked my foam in behind it from both sides; you want to block any light, but not stop the switch action.

When you take a photo with an SLR or DSLR, the mirror flips up out of the way to let the light reach the film. The camera has a few foam pads that cushions the impact of the mirror against the top of the mirror box. This may reduce camera vibration, as well as protect the mirror. The exact position will vary between makes and models; in my camera there are four pads, two small squares, and two skinny rectangles. I’ve jacked up the exposure on this photo to show you.

The camera is on its side. You see the mirror on the left, and the focusing screen on the right. That screen is found on the bottom of the pentaprism when the camera is upright.

I scraped out the old gunk, being super careful not to touch the focusing screen or the mirror. Cleaning the mirror is possible, but if you spoil the screen you’re screwed. Some, but not all, SLRs have replaceable screens.

Then I eyeballed the foam, cut it, and used pointed tweezers, and my faithful chopstick, to place them. It takes a steady hand, so don’t try this with a hangover.

After this was done, I blew out the dust with a blower bulb (don’t use canned air—it’s lazy, environmentally unsound, and way too harsh), cleaned up around the back, replaced the back, and closed it up. The foam puts up a little resistance against the rear door closing, but it latches shut nicely. A success, I hope.

If you followed the buying advice in part one, you may have picked up a whole kit, or a camera with a lens. If not, find one. I walked to a local film lab, and asked if they had anything available. They had a Vivitar 28mm lens for €40 ($49), which seemed about right. I’d prefer an Olympus Zuiko lens, because they’re just fantastic, but it’s clean, it works, and the price was right.

With the lens in place, I could test out the camera. I checked manual and auto modes, and in both, the needle in the viewfinder seemed to indicate a sensible reading. The lens aperture closed when I tripped the shutter, and the shutter itself seemed to work fine at all speeds. Also, the frame counter worked, the exposure compensation and ISO dial affected the exposure reading as expected, and all the knobs and dials feel good.

I was a bit worried about that one, because there was no way to confirm the external knob had engaged the dial inside the camera without this lens-on test. I checked the meter against the readings from another camera, to see if it was in the ballpark. I crossed my fingers.

Everything checked out! The only thing to do now was to load up film and shoot. With just a few exposures left on my first film roll, things have gone pretty well. Once or twice the shutter has locked open, so I have to look into that, but it appears to be an otherwise resounding success.

And the OM-2n? How is it at actually taking shots? It’s pretty good. The viewfinder display is a little small, and the positioning of the shutter speed ring around the lens mount takes a bit of getting used to. But the auto mode, combined with the easy exposure compensation, is like using a modern camera. Recommended.

Camera Repair in the Film Industry 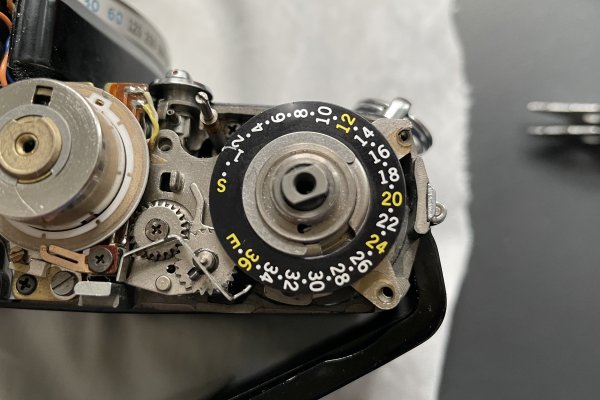 Fixing an Old Film Camera, Part 2: First, Do No Harm 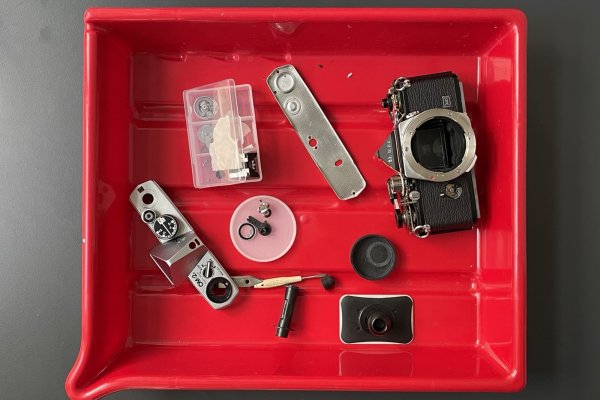 Finding and Fixing an Old Film Camera, Part 1: The Road to Olympus

Just a quick observation on adhesive removal. 3M makes an adhesive remover that is not overly aggressive on delicate surfaces but extremely effective at removing and/or dissolving all types of adhesive. Having spend 35yrs in the marine industry fixing boats & all sorts of systems, I find this product to be one of the best overall at removing a wide range of adhesive