“Who here has ever taken something apart?”

I stood in front of 20 sixth- and seventh-grade students at the Engineering Possibilities in College (EPIC), a summer camp hosted by California Polytechnic State University. Asking this question always makes me a little bit wary. After all, this is a generation of instant gratification. Kids these days get their first iPads before they can walk. Their pockets are lined with devices meant for digital play, not physical exploration. So, I thought, how many junior high students would actually spend their time learning about the inner workings of electronic devices? How many even care? 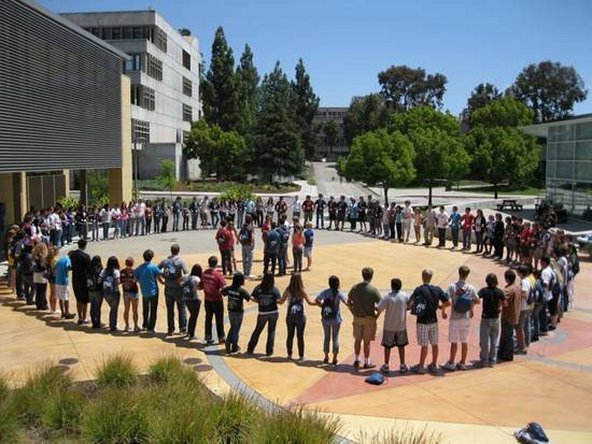 But a dozen hands shot up.

Over half of the young, bright-eyed, bushy-tailed, aspiring engineers had taken apart home electronics. Maybe I shouldn’t have been so surprised, but I was certainly relieved.

Discussion ensued. We shared disassembly stories and repair adventures. A handful of students had taken apart broken computers, radios, and cellphones. Others had put things together. One student had even opened up his mom’s working desktop. He installed a wireless mouse receiver in order to remotely control her mouse—an awesome prank.

Sharing stories got the campers excited. They were ready to take some things apart.

But before we could get hands on, I wanted to talk about our mission a little bit more. I wanted to hear what they had to say. If my first assumption—that junior high schoolers weren’t interested in taking their things apart—was wrong, what would they have to say about repairing every thing?

“It saves you money,” said one camper.

“You learn about what’s inside,” chimed another.

All awesome answers. All reasons why we advocate repair. But what about reasons that aren’t as obvious? What did they know about e-waste?

I didn’t want these campers to just think of repair as a hobby, as something to do occasionally. I wanted this digitally savvy generation to understand why repair is a necessity.

I explained: Electronics mining operations take place in many developing countries, so unfortunately many miners are extremely young. Sometimes, those mines collapse. The profits from other mines in conflict zones, like the Democratic Republic of the Congo, fund wars that result in as many as 45,000 deaths a month.

Though the novice engineers had some knowledge about e-waste and its effects on the environment, they were appalled that children younger than themselves were harmed by mining and e-waste in other countries.

They asked: “Why would the kids do that?” and “How could adults let them?” Unfortunately, a lot of money is made (usually by other people) when children mine electronic metals. Not to mention children get paid relatively high wages to do the dangerous work—money to eat, money to go to school.

At the end of the discussion, a camper raised her hand. For her, it was simple: “So if people just know how to fix their things, these kids won’t get hurt.”

Going into this camp, I was unsure about how much of the repair world these kids would be able to grasp. Turns out, they were not only thrilled about repairing their stuff, but were starting to understood how important repair is for our world.

We passed out toolkits and magnetic mats to pairs of campers; then, we challenged them to completely disassemble and reassemble cell phones. In a mere 45 minutes, we had 10 fully-reassembled cell phones and 20 fully-ecstatic engineers (with their new toolkit prizes).

Most campers agreed that repair was a lot easier than they had thought. They were eager to “fix” all of the broken devices around their house (you’re welcome, parents). Coupled with their newfound determination to repair instead of dispose, learning how easy it was drove home the full experience.

At the end of the discussion, one student raised his hand. He had an idea: “This might be a little off-topic, but I know that a lot of third-world countries use manual water pumps to get their water. It would be cool if you guys made guides on how to fix those.”

I told him that was a fantastic idea. And he should check back with us soon, because we, too, had the same idea.