Greenpeace released its 19th Guide to Greener Electronics, a report that grades companies based on sustainability efforts. And, according to Greenpeace, most of the world’s renowned tech companies—including Samsung, Google, and Apple—have lots of room for improvement when it comes to greener tech.

Samsung and Google both earned report cards they’d be ashamed to show their parents. Amazon fared even worse—earning an F for their environmental efforts. Even Apple, which often touts its commitment to sustainability, underperformed—in part, due to the design of their products.

While none of the 17 manufacturers that Greenpeace considered in the report managed an A, top-of-the-class honors went to Fairphone—a small phone-maker that’s committed to building an ethical, modular, repairable phone. 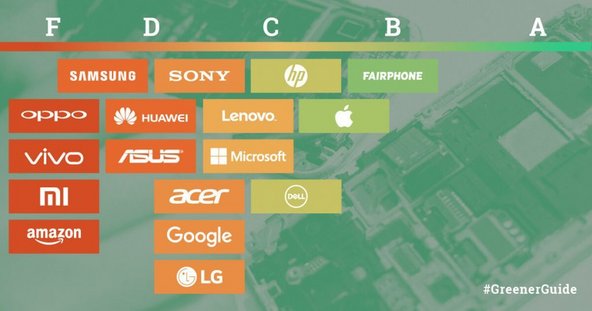 As part of the grading process, Greenpeace judged gadget-makers on three areas of environmental impact: Renewable Energy, Hazardous Chemical Elimination, and Sustainable Design. Each area counted for ⅓ of the company’s overall score. For the first time, Greenpeace factored ease-of-disassembly into their metrics for Sustainable Design. As we’ve discussed many times on this blog, devices that are easier to take apart are easier for owners to repair—but they’re also much easier for recyclers to process. Glued-in, integrated batteries pose a significant challenge to most regional e-waste recyclers. Products have to be disassembled, and lithium-ion batteries need to removed before they make their way into shredders. Obviously, batteries that catch fire during disassembly or in a shredder make it a lot harder for local recyclers to do their job. Still, integrated Li-ion batteries are on the rise in most consumer products.

To assess ease-of-disassembly and product repairability, Greenpeace sent dozens of products from the world’s top consumer electronics companies to iFixit earlier this year. We assessed those laptops, phones, and tablets—and ranked them on our repairability scale. 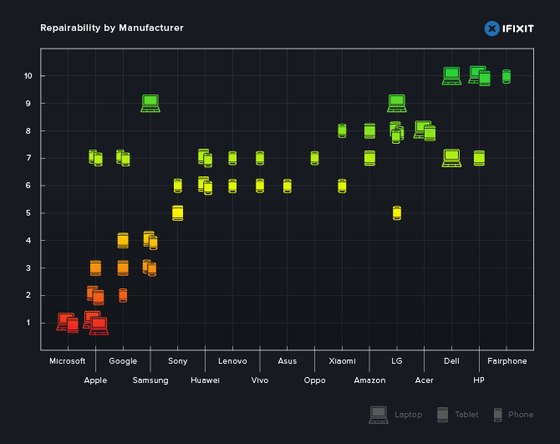 Greenpeace factored those assessments into its Guide to Green Electronics, weighing them against other factors—like commitment to renewable energy, supply chain assessments, carbon footprint, transparency, and e-waste management.

Surprisingly, Fairphone—a four-year-old phone-maker out of the Netherlands—out-schooled the world’s most prominent, most well-funded manufacturers to take the top slot. Founded in 2013, Fairphone started as a crowdfunded project to build the world’s most ethical phone. Every decision the company makes—from phone design to packaging to resource management—is in service to that goal. Fairphone has a radically transparent supply chain, visits its factories, and built the most repairable phone we’ve ever taken apart. (Try this on for size: you can swap out a broken screen on the Fairphone 2 with no tools in minutes.)

Despite the company’s size, Fairphone is pushing the envelope further than brands that pride themselves on innovation. When Google pulled the plug on their modular phone concept Project Ara, Fairphone pushed ahead. This September, they announced that users could grab an upgradable camera module for the Fairphone 2—making it the first phone with an upgradeable camera. Right now the Fairphone 2 is only available in Europe, but the company hopes to expand into other markets. And while Fairphone is small, what they’re doing is important—because they put humans and the environment before everything else. And really, shouldn’t that be the norm?

“Fairphone set out to try to solve many of the IT sector’s toughest and most important problems: design a phone and a supply chain to build it that does not exploit its workers or the planet,” Greenpeace explains. “Fairphone has made important breakthroughs in modular design that make it easy to repair and upgrade, in contrast to recent designs by Samsung and other large smartphone manufacturers that are heading in the opposite direction.”

The Rest of the Industry Is Lagging Behind

What’s especially startling is how far the rest of the industry is falling behind. Greenpeace analyzed 17 different global brands. Only Fairphone and Apple were able to earn grades in the B-range. With a pair of C+s, HP and Dell earned grades in the acceptable range. Most other brands—like a bunch of frat kids the day after a party—sagged to the back of the class.

Google and Samsung ended up with a D+ and a D-, respectively. Greenpeace was especially critical of Samsung. “Samsung is both the largest manufacturer of smartphones worldwide and a supplier of key components to many of the other brands in the Guide, yet the company is holding the sector back by failing to tackle its climate change responsibility…” the report reads.

But hey, at least Samsung is outperforming Amazon—which earned an F for its lack of transparency in terms of environmental performance. Greenpeace explains: “While Amazon is willing to talk about its recent renewable energy deals, the company provides few details on its sourcing of recycled materials that are going into its devices, nor does it publish any restrictions on hazardous chemicals in its devices or being used in its supply chain as other leading electronics brands provide.”

The rise of Chinese-made smartphone brands—like Huawei, Oppo, and Xiaomi—also poses a massive question mark regarding long-term sustainability. These brands offer a more affordable option to people who need phones. Which is good. But Greenpeace found that Huawei, Oppo, and Xiaomi were particularly unforthcoming about their environmental initiatives. Despite carbon intensity goals, Huawei’s carbon emissions are increasing at a rate of 25% a year— according to Greenpeace. And neither Oppo nor Xiaomi publishes information about the materials used in their phones, recycled content, or take-back data.

Apple Could Have Done Better

Since Tim Cook has taken the reins, Apple has doubled down on sustainability—even hiring former EPA Administrator Lisa Jackson to lead their environmental initiatives. In many areas of the Guide to Greener Electronics, Apple is the clear leader. Greenpeace gave Apple high marks for reducing energy usage, shifting to renewables, mapping its supply chain, and reducing hazardous materials. But Apple fell far short in one area in particular: sustainable design.

While Apple has said it wants to move to a closed-loop supply chain, Greenpeace criticized Apple for planned obsolescence. Gluing in batteries and using heavy adhesive “continues to make disassembly, and thus higher material recovery, more difficult,” Greenpeace explains. Greenpeace was also critical of Apple’s efforts to squash Right to Repair in the US—legislation that would increase an owner’s access to spare parts and repair services for pricey gadgets. In the end, Apple’s design shortcomings were enough to knock their standing below Fairphone’s.

Indeed, most major manufacturers fell short on resource management. So much so, that Greenpeace deemed planned obsolescence a design feature of most tech companies:

“Faced with market saturation for their devices in many countries, companies across the sector have increasingly changed the design of their products in a way that accelerates the replacement cycle by, making them difficult to service or upgrade, shortening the useful life of otherwise functional devices. Apple, Microsoft, and Samsung are among the companies moving in the wrong direction on sustainable product design.”

HP, Dell, and Fairphone—Greenpeace noted—are the notable exceptions to this trend. Check out the Greenpeace’s full 2017 Guide to Greener Electronics on their website.