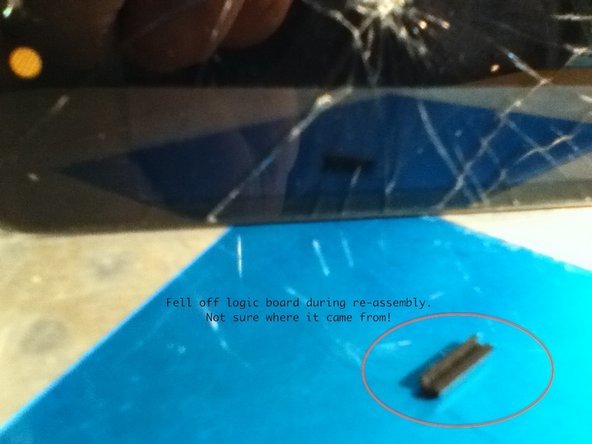 A customer brought in an iPhone 4 with a badly cracked (smashed is more like it) front display. After scouring about the internet -- well, not really, I knew iFixit would be the place to go -- I ordered the Display Assembly and iPhone 4 Liberation Kit.

The whole process went very well. The kit arrived as promised and the repair went very smoothly. From start to finish, it took about 2 hours. I've done many Mac repairs, but this was my first iPhone repair, so I went extra-slowly. I must also give a hat-tip to my lighted magnifier: some of those screws are the tiniest I've ever seen!

I did have one problem though: when I was attempting to reinstall the logic board (step 21 in reverse), a small rubber bumper came loose from 'somewhere' on the board (I think). I've attached a photo of the bumper, so maybe somebody can identify where it belongs. It's seldom good when you've got parts left over!

I had a few issues with the guide, and I left the following notes in the appropriate places:

Also, the adhesive is VERY strong. I had to use my plastic opening tool to assist in prying the battery loose. This was probably the most nerve-wracking part of the job. Fortunately, I had watched MJ's teardown video where she specifically mentioned that.

For step 16: Be sure to check the notes section of that page, particularly the one from 'boo' who very accurately describes what I saw too. Whether the guide is incorrect or there are actually two different order of arrangement, I can't say.

For step 21: Scout about and identify the location of that rubber bumper before it comes off!

Last note: this screen was so badly smashed that it did not come away from the chassis whole. A few small pieces, about 2x5mm, were stuck to the adhesive in the vicinity of the home button. I only noticed when the new display assembly wouldn't seat properly. Getting those glass shards off that adhesive was a real pain. (Not literally -- I didn't cut myself or anything.) 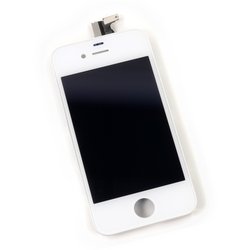