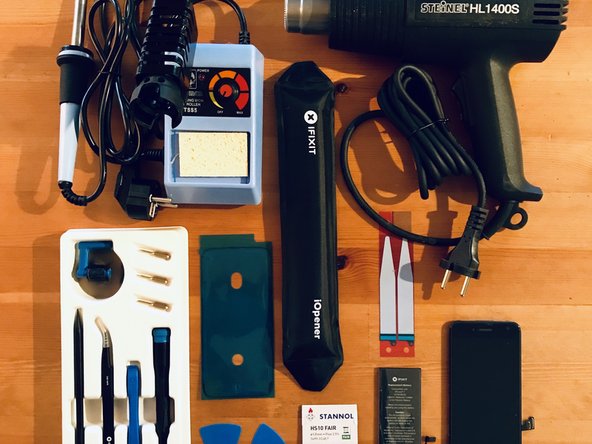 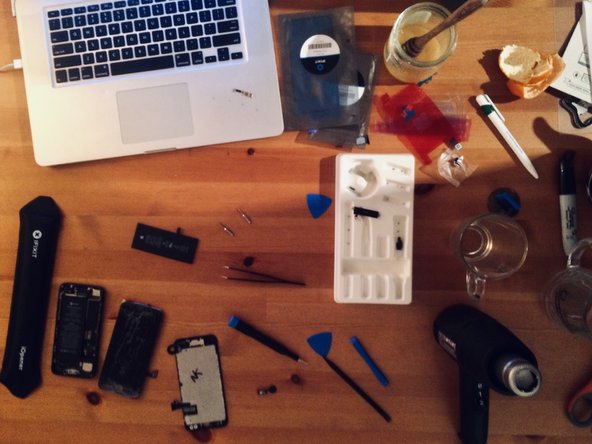 I hate protectors and cases, so I always use my phone "naked". Not any more. Since Apple started giving their phones rounded edges, they are harder to keep a grip on, not to mention that the likelihood of screen breaks increased drastically. Anyhow, I did not actually drop my phone, it slid out of my apparently very slippery pocket onto a hard concrete patio, shattering the screen entirely. I installed protective film to protect my fingers and got a case to soften future falls. I used my phone for about a year in this state, weighing my options. It was going to cost me almost double to have the replacement done by apple, so I decided to give the replacement a crack.

For the same price as screen replacement from Apple, I bought the iPhone 7 screen and digitizer, a heat gun, a replacement battery fix kit, and iOpener, and a soldering station with 5g of Stannol Solder, the last two being for other projects. I wish I would've gone with Apple's service.

The repair went smoothly with no damaged components or hand slips. This was my third or fourth screen replacement, so I was familiar with the general procedure. After the new screen was in place, I turned on the phone with excitement. Force touch barely ever worked, swiping and typing was a nightmare, as the screen often did not register my inputs, and even the colors were off (much cooler than the original). What a disappointment! Different colors was something to expect, sure, and even changes in touch sensitivity, but not to this extent... I literally started hating using my phone, because every third gesture or typed letter needed to be repeated several times. I researched the issue, and the web (including iFixit) suggested that the contacts may be loose. I took it apart again, disconnected and reconnected all contacts, and saw no difference. I used the new screen for about a week, until it got so frustrating, that I simply decided to put the old screen back in. Ladies and gentlemen, it was one of the greatest little joys to get the original, cracked-beyond-belief screen back in place... I was so happy to be able to USE my phone again! Imagine how bad the touch responsiveness must have been! I could finally force swipe between apps again, and slide through webpages with silky smooth responsiveness.

I get it, iFixit sells tools for repairing your gadgets, and I'm obviously a huge fan of repair. I also understand that to repair something yourself, you need to have a replacement part available. As Apple does not make OEM part readily available, we have to rely on aftermarket parts. So yes, selling repair kits and tools and making guides would be completely useless if one wasn't able to offer the replacement parts alongside, so I get that iFixit sells the aftermarket part. What I didn't expect was such a low quality!

My advice? Don't buy this screen from iFixit! If you are able to find and OEM part, then get it and please let me know in the comments where I could find it as well. Happy fixing!

Sorry to hear that! You can reach out to support@ifixit.com and they can help you find a new, working screen!

I buy all my parts from

I find Canadian cell parts the best because they sell some high quality parts and good prices. (the prices look high because they are in Canadian dollars) and i am 99% sure they ship to the US. I would check them out.

Sometimes Amazon, eBay and Alibaba are worth looking for parts.