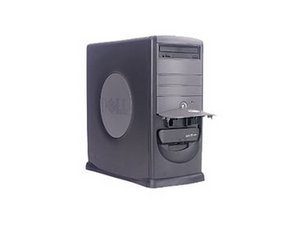 the Dell Dimension 8300 was a high-end desktop hailing from 2003. it has socket 478 processor support and came with 4 GB of ddr2 RAM

Dell has Video Card failure;Help save this faithful PC! 2012

The diagnostic lights in back YGYG indicate a video card failure. This desktop has been awesome since 2004 for my very basic needs. Can we save her?

I thought my NEC LCD1712 was failing because I was getting stripes on the screen and finally couldn't see anything. I replaced the monitor with a AOC LED HD monitor model #E2243FWK. That worked for one day.

The next day the computer is "on" but won't boot-up, monitor says "No Signal", keyboard doesn't work. Other devises connected to via wireless network, i.e. printer are working. (there's life!!!)

I shut it down, disconnected everything, opened tower and cleaned out tons of dust. Didn't re-seat the card. Should I try that? (I don't think it has a AGP card as some say.) But I really don't know enough to know.

I know it's time to upgrade, even though this computer has been great & served me well. If I could fix it, I would continue using it for very basic stuff.

If you want to try a repair here is a link to one possibility for a video card. Note it does not have TV out--keeping that feature would increase cost. If you don't want to gamble on the repair I would buy an inexpensive external drive case that matches you hard drive. You may then pull the drive and place it in the case to connect to your new computer to retrieve your data. Good luck.

Thank you very much for your suggestion. I am a very, very basic user & the TV out does not need to work for my needs. Ideally, I would like to get the Dell working again at minimal cost of course. If that's not realistic, then I will definitely try your suggestion. Thanks for taking the time to respond, appreciate it.

This is really late.. but the 'no signal' could indicate that your computer hung up in the POST test.

Since you recently changed the video cable, I would suggest opening up the box, removing the video card and reinstalling it. It may have shifted when you plugged the cable into it. The traces (pins) on the AGP card are very small, and can easily short to the next pin if the card is not securely installed.

Also, other cards (usually the modem card) can fail and cause the system to not boot. Remove all cards except the video card to test this. If it works, then power down, and reinstall one card at a time test booting as you go to discover which card is bad.

Since your POST test stopped on the video card, I would bet that the first paragraph would have solved your problem.