Awhile back, I was working on my 2.66 GHz MBP that I bought in late June 2009 when suddenly it just shut off, now it won't turn on at all. The battery level indicator still lights up when you press the button on the side. The only thing I did was when I bought it, I upgraded the HD from 320GB to a 500GB one.

After it wouldn't turn on I reseated the fans but that did no good.

I took it to the genius bar at an apple store and he pushed the power button a few times and said "Oh, it's gotta be the logic board." He didn't open it or anything. I asked how I'd go about getting that replaced since my warranty isn't up until June 2010 but he noticed a small 'dent' (see pic below or larger version here) 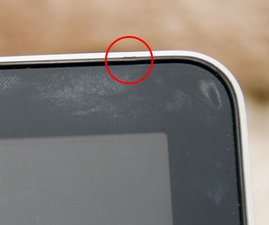 He says it's pushing into the screen and damaging it so he said that that voids the warranty and would require they replace the logic board and the whole screen to the tune of $1,700 (I only paid $1,999 brand new).

I tried to tell him the 'dent' happened months earlier and that the screen works excellently. I told him I didn't understand what one had to do with the other and why they couldn't just replace the logic board since it's under warranty. He made some dumb car analogy that if you take your car in for one problem and they find another, they HAVE to fix both, which is certainly not true.

Any ideas on whether it could be anything else? Anyone have any related advice?

Thanks guys, I made an appointment for tomorrow (Wednesday) at a different apple store. If anyone has any other advice, especially anyone that works at an apple store as a genius who knows the ins and outs of the system, I'd greatly appreciate it. Thanks again, Matt

I'd go back to an Apple store, hopefully a different one, and try again. Granted I don't have the terms of the Apple warranty memorized, but it seems odd and not quite right that they would not honor the warranty because of a bump on the screen, especially since the issue is that it does not power on at all. I don't know of a way that subtle screen damage could kill the board.

So, yeah, I'd go back, find another "genius", be really nice to the person, and potentially even buy extended Applecare for the machine, or perhaps an iPad...a gesture such as this might give them incentive to help you. I would even go so far as to mention to them you're willing to buy Applecare if they help you out. They do have a lot of discretion as far as how they end up dealing with a situation, so in turn, the way you act and present it to them also makes a big difference.

On another note, if you haven't already, I'd try reseating the RAM and verifying that the AC adapter is good, as well as performing the various resets on the machine.

I would contact Apple itself with all the details and demand my warranty be upheld. I would definitely not let that person (I won't call him a genius) be the last word on this. Ralph

Sorry--I didn't see your answer when I posted. +1 Ralph

The car analogy makes perfect sense if it is under warranty...they dont want a bad component going unfixed and causing more damage, and thus more money down the road

please erase your answer and start a new question.