I bought a 12" 1.33ghz iBook. It works perfectly but has a cracked LCD. I bought an LCD from an earlier model iBook off of here to replace. The only thing I replaced on the 1.33ghz iBook was the panel. I used all the existing cables and housing. The problem is that when I put the non-cracked panel in, the LVDS cable gets burning hot. I thought these panels were interchangeable. What gives?

Can you provide us with the model numbers of both units? Ralph

Hi! I've encountered this problem as well. I don't know why exactly, but certain variations of the 12" 1.33GHZ iBook require a very specific screen, namely the ChiMei N121X5-L03 (pictured). I ran across about 75 of this laptop a year ago, about half with this issue, and mostly with broken or missing screens, and it took a while to come to this realization, but that was definitely the problem -- use the right screen, and they work fine, and use the wrong screen (any screen other than that one), and you get a black screen and a very hot video cable right by the plug. If you look at your old screen, I'd be willing to bet it's a ChiMei.

The "problem" is with the cabling (the video cable, if I remember right), and not the laptop specifically. If you replace the cabling with that of another laptop that doesn't need this specific screen, you can then use any screen on the laptop.

But again, I don't know what it is about the ChiMei screen and the specific cabling in these laptops that makes them work together. The ChiMei screen DOES work with any cabling, which means it's the screen cabling that has the specific preference for the screen, and not the other way around. It's the only instance of iBook 12" screen incompatibility I've encountered. I mentioned all this about 6 months ago, but no one really seemed to believe me or confirm another case of this at the time, so it's good to hear others have found the issue as well.

Also, I just uploaded a second picture, which shows the back of the screen, because the ChiMei screen has a distinct appearance along the back that is helpful in identifying it. These can be purchased on eBay by searching for the part number, however the prices are not generally very reasonable, so swapping the cabling is likely the cheaper way to go. 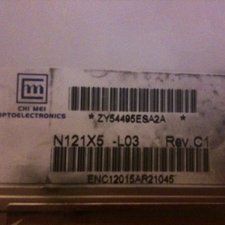 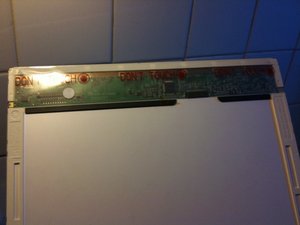 I am going to try the LVDS cable out of the donor machine, but that means a lot more dismantling first. I will post how I get on.

Did you find a solution?

I can confirm that my cracked screen is a ChiMei, so it looks like a cable swap is required. Thanks for the confirmation rdklinc. However my experience is that the ChiMei screen did NOT work when I tried it in a G3 (the only other 12" iBook that I have to hand). I got the same blank screen.

Using the LVDS cable from the donor machine was successful.

rdklinc's info is confirmed - the ChiMei screen has a non-standard cable that is not compatible with normal screens.

Thanks for your help.

It would be useful to others if it was noted against your Product code: IF150-052 that in some 1.33GHz 12" iBooks a replacement LVDS cable is also required.

If in doubt if parts are interchangeble, try checking the bookyard.

The links just won't get to the specific parts so I added this to get to the main one: http://www.thebookyard.com/

The problem with the original link is that 'iBook' in the middle of it should have a lower case b but it gets changed when the post is uploaded, which breaks the link. However this one should go straight to the LCD panel.

Thanks for your help it was making me crazy. But the question now as a layman is. didn`t I burn the replacement screen when the cable got hot? and why didnt even the backlight turned on?

Great help . thanks a lot. When i change the cable i`ll let you know to triple confim it.