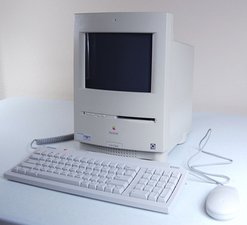 How to use this relic from apple?

I had this relic from mac how to make good use of it? ilost password of this machine i am in mumbai india if anybody can help.....

I have known a couple of people who use their old macs as juke boxes.

This type of machine served me very well for years. I would not erase the hard drive till I knew what programs are on it. Here's a link to the basic information on the machine. The main problem right now seems to be the password protection and I don't remember that machine having one. Some of the programs, like Claris Works did have passwords. Can you tell what system it is running and when is it asking for a password. Maybe you can jog the memories of a couple of the older users around here to be able toget this machine functional again.

Could we possibly look at this request seriously? It might be the only shot at a computer the poster has. It was a great computer in it's day and was built to last, all it may need is a new battery and a software fix. I find suggestions of using it as a fish tank or wall clock insulting.

I highly doubt anyone would be using this "relic" as a main computer. It's just not feasible, and it obviously doesn't work right now so he must have something else to use. These other practical solutions work right in with the philosophy of reuse, reduce, and recycle.

thanks for your guidence but it seems nothing can work so if any body interested in this machine i would sell it. it got trinitron crt so somebody just attach tv kit and turn it in mini tv.is it possible?

Is the problem just the password or is there something else wrong. The password problem can be solved.

So maybe just use it as a display you think? That's what I'm saying about scrapping it, you can get an enclosure and make an external HDD too.

How about turning it into a fish tank?

ref. to rab's comment about financial status.. well it is not about money but utility i think this machine can be usefull for only writing just add usb drive or it can be use as mini tv. problem is how to make it useful instead of throwing it in as junk. well u may know there are lot of people living on this planet for less than 1$ a day...this is try to help them if at all possible.

You might want to put a simple OS on it and use it for basic functions, maybe a glorified typewriter as you say.

a fish tank is funny - but i would make a little upgrade - mini itx board (santa rosa), 2gb ram, a nice large hdd, wifi and a nice lcd and so on - there are many ways to build something like this - even a half toasted MacBook logic board would fit (had a few with burned away battery connectors - the are running but never would be able to run battery powered).

well there are number of problems one, no key board no mouse. only this all in one device. so it seems difficult to activate this design marvel and i try to repair it locally but people are not used to this design so for them it is difficult to open and close this device.and it is very old computer so spare parts are not avilable.

How about making a wall clock from the front bezel ;)

When I was an Apple Tech I ordered a couple of spare Colour Classic and MacPlus front bezels, fashioned some perspex to go where the CRT should be, captured a screenshot, printed it on sticky paper, stuck it on the Perspex, bought a clock movement with hands, drilled a hole in the centre of the perspex "screen", whacked the clock movement in and bingo, Apple Clock :) But only if it's beyond repair.

I think Easy Access was on those machines and it could be bypassed by booting from a system floppy (which I think I still have). Hmm, can you even buy 3.5" floppies these days...

You can always scrap it for parts. Or see if iFixit will purchase it.

Nice idea, but we only buy laptops for the reason mayer mentioned.

Okay thanks for the clarification.