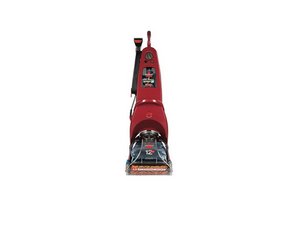 The Bissell ProHeat 2X Cleanshot is a carpet cleaner designed by Bissell.

I have no suction at the hose, but their is suction at the base gasket. I think it is clogged internally but don't know how to get inside the vacuum.

I just solved a similar problem with my model 9400 -- it was clogged inside the plastic enclosure, and the tube did not have suction, with or without the upholstery tool attached. The floor part functioned properly.

First I noticed that the sound this machine produced was changing when the round knob was turned to the "tool" position; to me it suggested that the air passage was clogged in this position of the knob. Then I used my trusted Dyson vacuum to clean the clog by sucking the contents in the tube and inside the enclosure by tightly holding the vacuum hose against the open end of the Bissell tool hose and closing the open slots in the connector end part of the tool hose by my hand in order to make it air-tight as much as possible.

This produced a lot of water that had collected inside the tube and enclosure; but it did the trick, since suction in the tube reappeared. Afterwards, I found lots of fir needles in the dirty-water tank that evidently were clogging the system since after last Christmas.

The hand tool appears to be working well except that I still cannot make it spray the solution reliably. I bypass this problem by using a separate garden sprayer.