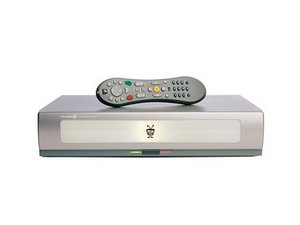 NEED HELP on HOW TO REPAIR This TIVO

On Start up it says Welcome, Powering Up but won't go any further. A little background on it, in case it could be related...because of an unrelated, reoccurring issue, I had taken it several times already to be serviced. They chose the last time I had, to replace the hard drive completely, rather than trying to once again repair it. When I picked it up, they turned it on, and started the set up process, so as to be able to demonstrate to me that my problem was fixed . In the middle of that process I had to leave & said that I could finish it myself later at home, and had them stop it before it had finished. I was in the process of moving at the time, so it was several months later before I was able to hook it back up. When I did, that is when I noticed the problem I'm having now, and I am no longer able to take it back to them because my Extended Warranty is now expired. Could stopping it during that process initially, be the reason it's now having this problem? Some1 told me it could have corrupted the pre-installed software, if this is true how do I reinstall it? Any help would be great! Thank you! Tyna

The software being corrupted after that interruption is a definite posibility, but I have to ask, did the TiVo have a rough ride during the move? No physical damage to the TiVo? If not read this, it has pertinent information on reinstalling the software. It's gonna cost you a few bucks.

Typically, being stuck on "Welcome, Powering up" indicates a hard drive failure. For more resources and information on this problem see:

Also, there are companies that can repair this problem. It'll cost you more if you send your TiVo off, but it might be worth considering. For example, see:

and also this place:

Try doing a Kickstart. After plugging it in hold the Pause key down until the light on the front turns yellow, then immediately release pause and enter 52. This should reinstall the back up copy of the system software. For more help with your model, Google "tivo kickstart" and your TiVo model number.