trying to change the CPU FAN on my MacBook Pro 13" Unibody Early 2011 I broke the connector on the logicboard. Two soldering points are gone, so I cannot solder the connector again. Now I'm considering about soldering the FAN on an USB-Port. The FAN needs 5V and 1,7W. I think, this should work, but I don't know the Pinouts of the FAN. I also don't know, if I only can use + and Ground from the USB-Port. Maybe the soldering point of the speedometer is still ok. Can someone help?

Hi im guessing your board model is a 820-2936 could you provide what solder pads are off the board??

A1278 from 2011 means 820-2936 board, verify that number near the fan connector before following this advice from my diagram. Zoom in on the fan connector area to find four colored lines I drew in MS paint of the jumper wires you will be soldering. I am aware that this picture looks worse than minecraft, but this is as good as it gets at 1:15 AM. 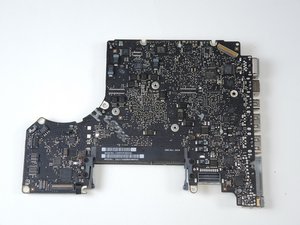 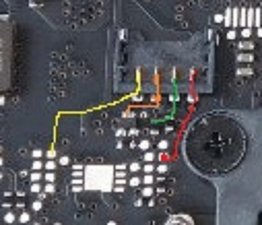 Let's go over the jumper wires you're going to be soldering; this is all fixable and you are going to be repair this mess right so it can be resold as a proper Macbook and not a frankenfuck with fans hanging off the USB line. What you have suggested is butchering. USB ports supply power even in an or S3 state so your fan will be spinning all the time which is obviously #@$$##%! At the very least if you are going to butcher attach to an S0 power supply so the fan will only spin when the computer is on, like PP5V_S0. Or find 5v nearby the fan and bridge it to fan control/tach but for &&^&'s sake do not try to attach this to USB!!

I would suggest buying a dead battery so you have jumper wire to run, just cut up the A1278 battery wire, and use individual strands inside each wire as your jumpers. R5665 is where fan speed gets sent to the SMC, R5660 is the pullup resistor creating the data line for the fan/smc communication when the laptop is in an S0 state, on pin 2. Pin 1 is basic 5VDC which is only sent to the fan when the laptop is in an on, S0 state. Pin 3 is the actual PWM signal that is created by the SMC, courtesy of pullup resistor creating data line for fan control at R5661 only when laptop is in an S0 state from PP3V3_S0.

There is a reason for this being there. So the SMC knows the fan speed, so the fan can spin at a certain RPM, so it does not spin at full speed all the time an die in less than a month, so the fan doesn't spin when the laptop is off and &&^& the battery and die. Fix the machines the way they are supposed to be when people buy them from the store. You will spend 10x more time trying to figure out how to modify them and it is not worth it over just doing it right, in the end it devalues them and makes the entire market of refurbished laptops look like a scam when people receive these pieces of junk. :(

I'm an idiot, but good news for everyone following the Guide of zzz. Everything works as described.

Unfortunately I accidentally demolished the soldering Point of the red wire you've drawn. I guess it must be 5VDC? I took wires from an old SCSI Ultra 160/m cable, a good choice. My Question, is there any other way to get 5VDC? Or did I maybe now finally killed the logic board?

find a boardview online and find a spot where pp5v_s0 is and use that, please don't ask me, ask google.com to find you the boardview.

hello zzz can you show me how to connect jumper wires for the fan on a macbook pro A1278 from 2009 my soldering points are gone...thank you.

Hold that thought! You can't connect the fan to the USB port connections as the system management computer (SMC) won't be able to access it and besides, the fan will go into over drive burning out in short order.

Can you take a good closeup picture of the damaged area so we can see what you are facing here. Let's see if we can find a way to connect the fan back in. You may need to find someone with the needed skills to patch the logic board or the only other option is replacing the logic board.

I agree with Dan on this one. I strongly suggest that you either try and repair your board, or worst case scenario, replace. I recently repaired a fan connector with tore off solder pads but attaching the wires to the traces that lead to the connector. You will need to carefully expose the copper of the traces (I used a scalpel and a microscope for that). Then solder some very fine wire to those traces. I used left over wiring from an old LVDS cable. Two strands of it will do. Connect those to the fan. Attach some images of your damaged solder pads etc with your question might help. That way we can see what you see.

I pulled out a thin wire from a broken Lightning cable. They are almost as thin as the fan’s wires.

You need to make 4 pieces, 5 cm for each is long enough to help you hold them steady and solder them.

Peeling out like one millimeter tip off the slave is enough.

You can do it quickly with a lighter.

Wet them with some soldering iron so you won’t need to add more on the motherboard’s solder points.

The little iron that is already there is enough.

I carefully soldered them to the 4 points on the motherboard, having care not bridging them,

then i have soldered the other ending to the fan ending I previously cut off.

I didn’t solder directly the fan’s wires to the motherboard because once you cut off the connector they already short and you won’t have much freedom to handle them.

Also, they will be too tight in case some day you will have to dismount the fan for cleaning.

Use a decent soldering station with the smallest tip you have.

At first attempt I used a cheap soldering tool I had around but I failed, it wasn’t getting hot enough.

Then I got a 30 bucks YIHUA soldering station with a thin tip and the temperature knob and I succeeded.

Consider I’m no expert in soldering I occasionally do it when strictly necessary.

Just take your time and be careful, if you are generally clumsy with precision works ask someone else to do it.

The result shouldn’t look too ugly, use 2 small black tape pieces to insulate the exposed points.

Put everything back together and test with Macs Fan Control.