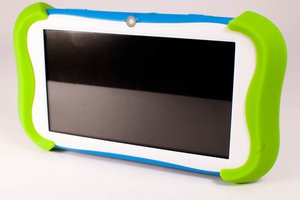 The Sprout Channel Cubby™ was first produced in 2014, it is a child friendly device that provides the functionality of a tablet. It boasts a 1024x600 touch screen, Two 2 megapixel cameras (one rear facing and one front facing), Parental controls and security, HDMI connectivity, Bluetooth, WiFi, 16GB Memory, 1GB RAM, and a 1.2 Ghz processor. It has access to internet and various application stores and applications, which can be limited by the parental controls

Why is my screen unresponsive?

Screen is lit but it wont register my touch what should i do?

turn off the device and power it back on. if this still does not work make sure the battery and screen are properly connected.

I cant turn it off. The screen is not responding to touch, so i cant hit the power off button on the screen. And holding down the power button only restarts it

De-solder the black battery wire and leave it for a few secs, then solder it back on.

I had the same problem. It started out with the top of the screen not responding to touch then gradually worked its way down until it was less than half the screen that would still respond to touch. I imagine the entire screen would have eventually gone but one day I had it on the charger and it must have went to fall off the bed but since the cord wasn't long enuf to reach the floor (it was coming from over the headboard) I found it just hanging on the charger beside the mattress and when I looked at it the screen had broke which of course made it where none of the screen worked! The best advice I have concerning this tablet is: if you're still within the time limit to return it to the store, DO IT because it's not a matter of will it end up having problems, it's how many problems is it going to have before it finally renders useless! This is only one of the MANY issues I had with this tablet the entire 3 mts that it was useable.