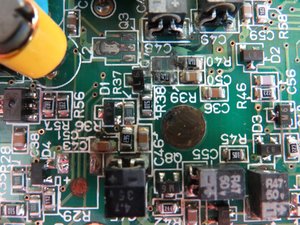 Hey everyone. I'm attempting to restore my old game gear. When I opened the system it became instantly clear as to why it had died in the first place. One, or a few, of the old capacitors had leaked and corroded in a small section of the logic board. I was able to get the majority of the material off the board by wiping it away with Qtips. However, in the process two small pieces fell off the board. C48 and Q3 are the pieces that fell off. I was being extremely careful not to damage anything and the slightest touch quickly removed them. Q3 was completely covered in dried up cap fluid and took quite some time to get the solder points to where they are in this picture. I haven't started cleaning the C48 solder point yet. Does anyone know if this is fixable? If so, does anyone know where I can get replacement parts for this board? I have no idea what these are called. I can say that the piece that goes on Q3 has the symbol XL 36 (same chip down and to the left of the yellow cap in the top left corner). No symbols are readable on the tiny piece that came off C48. R40 and R39 on the board will probably need to be replaced also just by looking at it. That's if this can be fixed. Thanks for your assistance!

This is an old question but I am a little farther along in the process than NavyVet was and I wanted to give everyone an idea of what to expect. To answer, "Is this fixable?" Yes it is. BUT. If your board looks like the one above then the leaking capacitors have eaten away at the pads and traces around them. If you feel *just* confident enough to solder on some new capacitors then I recommend finding a mainboard AND matching power board on eBay (that are in better condition ;) and replacing the caps on those instead (or just get an already-refurbished board and call it a day).

If your board looks like Navy's then you are well past "Soldering 101"-level board repair. All of the caps are surface mounted. After soldering they need to be bent 90 degrees to lie against the board, and compromised pads will tear right off. Damaged pads and traces must be removed and the corrosion must be cleaned off, then new traces and pads are bonded to the board followed by new caps. It's fun but involved. Good luck! 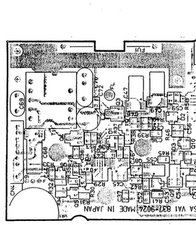 This manual Sega Game Gear should help you resurrecting your Game Gear.

I want to apologize for the delay in response but thank you for the information you shared with me regarding this. I purchased a game gear for parts on ebay and its motherboard is in pristine condition compared to my original one. The caps need to be replaced but the "for parts" system stilled powered on but with a blank screen. With a little luck I'll soon have a working game gear again.