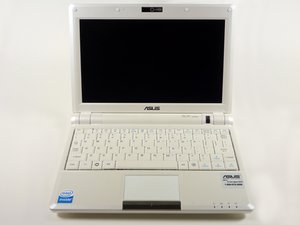 What do the flashing front panel leds mean?

This notebook won't boot when cold. It will boot after it has been left on for a time and runs perfectly thereafter everytime. Front panel leds run the following sequence:-

Power led comes on and remains on.

Battery led shows orange if battery needs charging or remains off if battery is fully charged.

HDD led lights up momentarily followed by the wireless led.

HDD led and wireless led then go off.

IF ... the machines decides to boot - the HDD led then comes back on and the screen displays the Asus boot logo and boots normally.

IF ... the machine decides no to boot the HDD led doesn't come back on.

This flashing led must be a clue - but I can't find any information about it.

Machine has new ram, SSD, OS (Win7 32bit) and all updates including bios