Getting three Beeps, Not RAM error

No history on the machine as it was an eBay buy.

I'm wondering if this is possibly connected to the GPU issues on this program: https://www.apple.com/support/macbookpro...

I see we got another question on this type of error today.

My MacBook don't turn on, only get Beep every 5 sec interval

Since this original machine came in I have the same problem on two more machines:

The screen pictured on this discussion is exactly what I saw on the B machine.

Hey everyone, after having this problem, i found out the problem might not be the soldering at all. read on...

I have a MBP 15" early 2011, had the logic board replaced in the apple program for the video chip, after that, i started to get kernel errors once in a while, all was pointing to RAM, but could never actually find a defective stick and tried many, after a while of seating and reseating the sticks and a fresh install os the macOs it stopped for almost a year with no problems i thought i was done; only to begin crashing, powering off and beeping this week.

I'm having exactly the same problem as this.

So I took it apart again, and what did i find... apparently, as i said, and for everyones happines it migh not be the soldering at all!!

It seem the CLIPS that hold the stick closest to the keyboard are worn and do not have enough pressure so they do not hold the ram in place all the time, a little bump and the RAM stick springs up like half a milimeter and the problem appears.

What did i do? Got a 1.5mm (.60 cal) piece of flat styrene about 3mm wide and 7 or 8 mm tall, put BOTH RAM sticks in place and with a little plastic tip/spudger push down the stick closest to the keyboard so the clip can make its full travel inward and insert the styrene pieces one in each side in the slots between the clip and where the screws for the bracket are and then push them towards the RAM contacts to make pressure inward so the clips are pressed firmly against the sticks (you wont be able to remove the sticks without removing this styrene pieces). 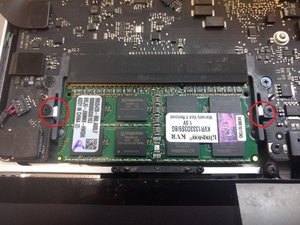 I did this, the MBP started with no problems, i can now shake it and won't freeze and/or beep at all.

I'll try to make a video or at least a photo guide showing what i mean and post the link (it will be my first YT video so be nice hahaha) so it shows the fault and fix clearly.

Awesome Dude! It worked. You just saved me 2 MBP Logic boards. Thank you.

I dropped my MacBook Pro 15 mid 2012. It would not start after that and gave the 3 beeps. I read it was most likely Ram so decided to upgrade my 2 x 4Gb to 2 x 8Gb. Still 3 beeps. Checked each card in lower slot and both old 4Gb cards were good but none including the two 8Gb HyperX Kingston’s would work in top slot.

I googled and found this fix, thanks.

My clip was snapped off. I had bought some feet as I had lost one. I used another ones to hold the card in place by putting it on the top edge of the card in the top slot. It held it down perfectly against the back cover.

I have the same problem, please did u do the video or at least the photos .??? I want to do that In my MacBook but I didn’t get it how SOS Help me please

It worked for me too!

I was installing New thermal pads to my MacBook and then it started to do those annoying 3 beeps. I was sure I installed everything well, why its happening!?

Just tried what you said and boom it worked at 1st try! Thank you so much!!!

It worked!!!! Thank you very much!

Hey Mayer I had the same issue just now and I was looking for a solution in this forum, unfortunately I didn't find it. I've tried everything you have and I even put my logic board in the oven to perform a reflow and even that was no help. BUT As I kept digging I found something! What everyone experiencing this problem should try exactly this! I myself bought brand new RAM and replaced it so I believed that RAM wasn't the issue. But it ended up being a RAM issue. Not the RAM but the RAM SLOT itself! So please try this even if you think that RAM isn't the issue because I doubted it would work but now my Macbook is up and running!!!

Also try this as well:

Same issue. I sat down on couch, the moment I put MBP on my knees, it quit. I found that the cursor will stop moving as the failure begins, right be before beeps or shutdown.

Tried again, cursor quit, I rapped the back of the MBP lightly and it came back to life. I knew right there this is a mechanical issue. Digging online, one guy said the black screws retaining the RAM clips were too tight.

Santia delatorre above also has the solution, I used thin wall rubber tube chunk, pushed the clip back over the RAM stick…..that has to be done just right or it wont work. MBP would not start w/ the back removed, spring loaded pins in various places must be in contact with the aluminum back to start, after starting it can be removed, leave screws out. Rotate computer so display is flat on its back, watch the cursor movement while gently probing RAM stick on top, you can find right where the issue is. DO NOT touch anything electrically conductive with fingers. As suggested above, I cleaned RAM contacts, loosened 4 black screws SLIGHTLY, jammed tube in clip to push it over and retain RAM. When I started I could actually see the RAM stick was crooked, higher on one side than the other. So far so good. Thanks to all. Don’t panic.

Hi, After trying several procedures, I loosened the 4 black screws of the RAM assemble and INCREDIBLY that was the solution, I can’t imagine why but it worked even after turning it off and on several times and sleeping overnight

@mayer - I think you have a bad logic board. The error code implies memory or the memory slots are bad Intel-based Mac Power On Self Test RAM error codes.

I don't see how this would be the graphics issue. Besides, this 13" model has an intergraded GPU unlike the other systems which had issues.

@mayer - Are the black plastic clips broken at the mid plane? If they are the system was crushed.

@mayer will say it is either bad slots or GPU, had a MacBook 15" before doing the same thing with no physical damage. Scrap or resell unfortunately :(

Jesus christ guys it worked, I was worried I had to replace my logic board but with a little handpush on memory whiles turning it on just to make sure the faults are from the clip and guess what voila my MacBook turned on.. Thanks guys I appreciate it Vincent from Ghana

I’ve just had the same trouble after a cleaning session of my A1502 macbook (retina late 2013).

After disconnecting the battery 24 hours (no adapter neither), my mac started again and work like a charm: the battery appears to have 1800 cycles (to compare to the 1000 announced as his limit)

Those three bips seems not to be restricted to ram failure…

Idk if this might help anybody but I originally had two 4Gb RAM boards (or whatever you call those little things) and no matter what I would do, couldn’t stop the old 15” MacBook from beeping and could’ve sworn they’re seated perfectly. Then stumbled upon this page, then was about to try and find something to stick in there because I don’t have styrene lying around, then realized, “Hey, do I really need both sticks of RAM? Nah! I just need the laptop to turn on.” So I left the bottom slot open and put one of my two sticks of RAM in the top slot and voila, bye bye beeps and this old MacBook is able to start up. I’m giving it to a friend who just needs it to play old DVDs and that’s it. Hooray!